Whenever you enter a city or a town in India, mountains of burning waste is a common sight. Bhalswa in Delhi and Deonar in Mumbai are quite infamous all over the world. It is a known fact that the only way to get rid of this perennial problem is to follow the 3 R’s-Reduce, Reuse and Recycle. When it comes to innovation, it is assumed that all the technology and processes first come to the biggest cities but small villages and towns in Kerala are setting benchmarks when it comes to living is a sustainable way.

Kollam, with a population of around 4 lakhs,  is a town which primarily depends on fishing. Over the last few decades, the fishermen are facing the brunt of the plastic waste in the sea. Their catch has reduced to around 20% of what they used to wish on top of which they have to face the problem of plastic waste entangled in their fishing nets.

They realised that this plastic waste is also a problem for their source of livelihood – fish. So they got in touch with the government and the minister of fisheries proactively started a project to build a recycling facility run by women. It was killing two issues, plastic waste and women empowerment, with one stone. This project has been a huge success and by the end of 2018, they had collected 65 metric tonnes of plastic from the sea.

Another village in Kerala, Eraviperoor, has instituted a recycling project where the recycled plastic is used to construct roads. The Suchitwa System is the government’s waste management program which helps with the infrastructure for the Resource Recovery Facility. The waste is segregated at source level and the plastic is directed to the recycling facility.

The recycling facility employs shredders which can shred 500 kg’s of plastic in a day. They then sell this shredded plastic to the government’s Public Works Department ( PWD) which uses it as a raw material for making roads. The government has instituted such projects across Kerala and they have succeeded in recycling 9700 tonnes of plastic which has been used to construct 246 km of polymerized roads.

Research has found that the most effective environmental initiatives are community-led and led by the local people themselves. These two examples should serve as motivation to the bigger cities that they themselves carry the keys to unlock their waste management problems. 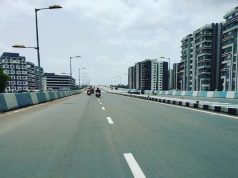 Waste to Wealth: Surat Gets India’s First Road Made from Steel Waste