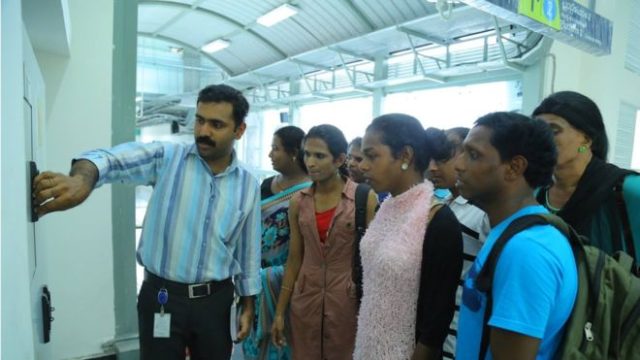 Kochi Metro’s move to hire 23 trans people from the self help group Kudumbashree in housekeeping and ticketing earned national as well as international attention. It is the first government owned company in India to formally appoint them.

Many rounds of on-the-job training were conducted ― the new recruits were introduced to the various facilities, trains and metro stations as part of their training, says a report in Economic Times. In terms of publicity, it also functioned as a “significant symbol of the modernity of Kerala’s outlook as a State, with the visible third sex presence in the public utility sending an important message to society at large”, according to Kerala’s Finance Minister Thomas Isaac.

Kerala was also the first state to formulate a transgender policy to protect the community from discrimination in 2015.

However, the publicity did the new employees more harm than good. Allegedly, newspapers published some of their photographs without their permission, and now their identity can no longer be a secret. It has complicated their relationships with their families. Moreover, they reported harassment on the job, as well as the inadequate salary and not being able to pay their rent.

The lack of gender neutral washrooms is also a source of discomfort. As most transgender people avoid public transport to circumvent harassment, commuting becomes costlier because they have to depend on taxis and autos or use their own vehicles, says a report by Godrej India Culture Lab titled ‘A Manifesto For Trans Inclusion In The Indian Workplace’. Within a week of the Metro’s launch, eight of the trans hirees had quit.

“Though there are many vacant houses for rent, the owners refuse to hire it out to us. We’re forced to stay in lodges coughing up over INR 600 per day. The problem of finding a shelter turned out to be an unexpected issue,” said Sheetal Shyam, a ticketing officer in an interview to Deccan Chronicle.

However, KMRL is working on feedback and trying to retrace their steps. “We have arranged for rooms in a hostel in Kakkanad, about 10km away from the metro station they work at. Twelve of them who need accommodation have agreed to move into these rooms by July 1. KMRL will also be providing them with a transport facility so that they can report to work easily,” Reshmi, a KMRL spokesperson told The News Minute. To make amends, Kerala’s Social Justice Department has proposed a toilet for transgender people at the KSRTC depot in Ernakulam.

This goes to show that only when a company hires trans people can they learn from their mistakes and fix them, because inaction and policies that simply stay on paper will continue to leave the trans community in the lurch.

Who are the Diversity Winners in the Pandemic Era?