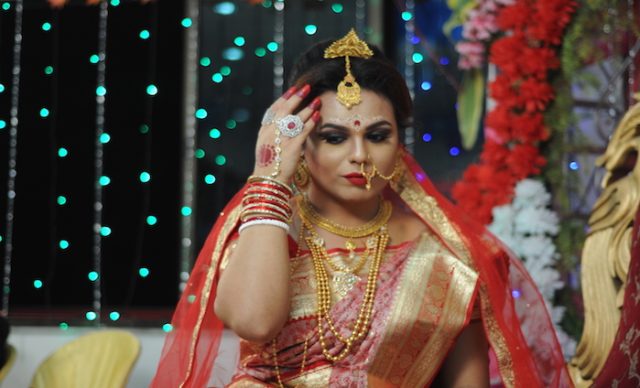 Shree is a terpsichorean, a theatre artist and also a social activist. Troyee foundation, a non-profit organisation, is run by Shree. The organisation specially works for poor women, street children and LGBTQIA community. Besides that, Troyee Foundation has a cultural wing from which they try to provide a platform to hidden talent. Shree had her social marriage legally solemnised through registration in 2017. She is married to her childhood friend Sanjay Muhuri.

Shree set an example for the transgender community by getting hitched the legal way with her childhood sweetheart Sanjay. “He works as a marketing consultant with a multi-national company,” Shree told eNewsroom. Sanjay had often been ridiculed by his office peers for being in a relationship with her. It was only post Shree’s SRS that they have accepted their relation.

“You know, even today, there is so much stigma associated with being a transwoman. Despite the law of the nation giving us an identity, we have to face a lot of discrimination. Initially our families were opposed to us getting married. They were worried about what people would say. But once I underwent surgery, to be what I had always been – a woman – my in-laws welcomed me with open arms,” said Shree.

As for the film, it was producer Aritra Das who had introduced Shree to filmmaker Ram Kamal Mukherjee. “I wanted someone who would believe in the character, and perform with great poise, aesthetic sense and justify it,” says Ram Kamal. Talking about her character, Shree told IANS.

“Working with Ram Kamal was a learning experience, as he knew exactly what he wanted from me. He was very sure about my make-up, hair and costume. He wanted a particular look that would look real on-screen. Mostly we have seen caricatures in the name of transgender characters in mainstream Bollywood movies. I was apprehensive before accepting the role, thinking that this must be a repetition of the same Bollywood trend. But when I heard the story, I got goosebumps and tears rolled down my cheeks. I immediately agreed to be a part of this film.”

Shree shares the screen with Lillette Dubey and Celina Jaitly in the film. Says Shree, “Celina is such a sweetheart, I adore her for standing by the cause and making me feel comfortable at the shoot. Lillette ji is a strict disciplinarian, which worked for me, because she would be very particular about her lines and my lines.”