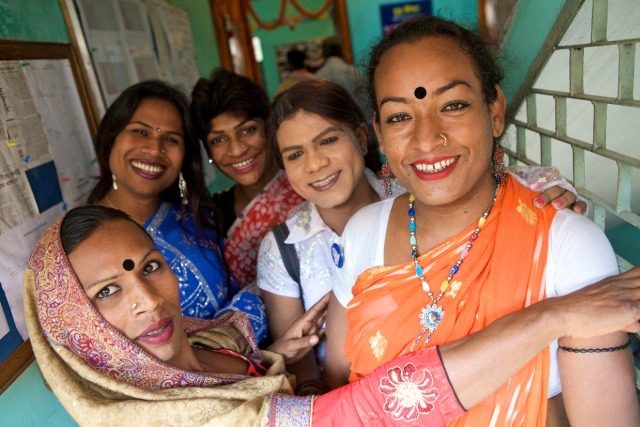 The transgender community has been assimilated into Indian society as hijras, long before transgender people started finding acceptance in the rest of the world. In April 2014, the Supreme Court made it official by recognizing hijra and transgender, eunuchs, intersex people as a ‘third gender’ by law. The nation’s association with the community has ancient roots.

Hijras traditionally earn their living by collecting alms and performing at weddings, births and festivals. The central feature of their culture is their devotion to Bahuchara Mata, one of the many Mother Goddesses worshipped all over India, for whom emasculation is carried out. This identification with the Mother Goddess is the source both of the hijras’ claim for their special place in Indian society and the traditional belief in their power to curse or confer blessings on male infants.

Seven ‘houses’, or subgroups, comprise the hijra community; each of these has a guru or leader. The houses have equal status, but one, Laskarwallah, has the special function of mediating disputes which arise among the others. Hijra houses appear to be patterned after the gharanas or family lineages among classical musicians.

Hijras make no distinctions within their community based on caste origin or religion. In Mumbai, Delhi, Chandigarh and Bengaluru, hijras of Muslim, Christian, and Hindu origin live in the same houses. In addition to the hierarchical guru–chela relationship, there is a kinship by which hijras relate to each other. Rituals exists for ‘taking a daughter’. The ‘daughters’ of one ‘mother’ consider themselves ‘sisters’ and relate to each other on an affectionate basis.

A commonly told story among hijras, which conceptualizes them as a separate, third gender, connects them to the Ramayana. When Ram was leaving Ayodhya to go into the forest for 14 years, the whole city followed him. As Ram came to the edge of the forest, he turned to the people and said: ‘Ladies and gents, please wipe your tears and go away.’ But the people who were not men and not women did not know what to do. So they stayed there. They remained there for 14 years and snake hills grew around them. When Ram returned from Lanka, he found many snake hills. He removed them and found many people with long beards and long nails, all meditating. Ram blessed these people. That is why hijras are respected in Ayodhya.

If, in Indian reality, the impotent male is considered useless as a man because he is unable to procreate, in Indian mythology, impotence can be transformed into generativity through the ideal of tapasya, or the practice of asceticism. Tapas, the power that results from ascetic practices and sexual abstinence, becomes an essential feature in the process of creation.

Ascetics appear throughout mythology in procreative roles. In one version of the creation myth, Shiva carries out an extreme, but legitimate form of tapasya, that of self-castration. Because the act of creation he was about to undertake had already been accomplished by Brahma, Shiva breaks off his linga (phallus), saying, ‘There is no use for this linga,’ and throws it into the earth. His act results in the fertility cult of lingaworship, which expresses the paradoxical theme of creative asceticism. This theme provides one explanation of the positive role given to transgender people in Indian society.

Born intersexed, hijras can, through the emasculation operation, transform their liability into a source of creative power which enables them to confer blessings of fertility on others. The link between the theme of creative asceticism and the role and power of the hijras is explicitly articulated in the myths connecting them to their major point of religious identification – their worship of Bahuchara Mata, and her requirement that they undergo emasculation.

Bahuchara was a pretty, young maiden in a party of travellers passing through the forest in Gujarat. The party was attacked by thieves, and, fearing they would outrage her modesty, Bahuchara drew her dagger and cut off her breast, offering it to the outlaws in place of her body. This act, and her ensuing death, led to Bahuchara’s deification and the practice of self-mutilation and sexual abstinence by her devotees to secure her favour.

This connection derives special significance from the story of King Baria of Gujarat. Baria was a devout follower of Goddess Bahuchara, but was unhappy because he had no son. Through the goddess’ favour a son, Jetho, was born to him. The son, however, was impotent. The King, out of respect to the goddess, set him apart for her service. Bahuchara appeared to Jetho in a dream and told him to cut off his genitalia and dress himself as a woman, which he did. This practice has been followed by all who join the hijras.

One origin myth is the story of Arjuna’s exile. He lived incognito for one year as part of the price he must pay for losing a game of dice. Arjuna decided to hide himself in the guise of a eunuch-transvestite, wearing bangles braiding his hair like a woman, clothing himself in female attire, and serving the ladies of the King’s court.

Hijras understand that their ‘other-worldliness’ brings them respect in society, and that if they do not live up to these ideals, they will damage that respect. But just as Hindu mythology contains many stories of ascetics who renounce desire but nevertheless are led astray by desire, so, too, the third gender experiences the tension between their religious, ascetic, ideal community and the reality of the individual human’s desire and sensuality.

This piece is part of a series on the LGBTQ movement in India.