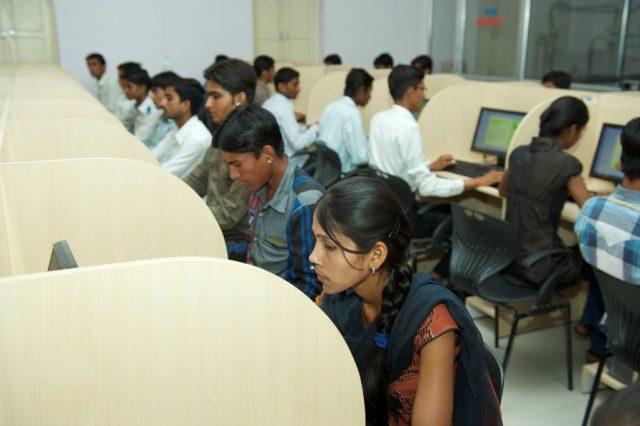 HAVING lived in Barmer district in western Rajasthan all her life, Vidya’s ambitions were no different from those of India’s rural youth demographic – advancement was best achieved by working in the organized sector on completing her education at a nearby college. Predictably, low industrialization and scant opportunities in Barmer were hurdles. The second largest district of India in terms of geographic spread, Barmer constitutes a major part of the hostile terrains of Thar Desert. The primary occupation of local inhabitants is rain-fed agriculture followed by livestock rearing, and there is a general lack of infrastructure facilities like roads, electricity, good schools and quality health care.

Today however, a small, but crucial, transformation is taking place in the socio-economic landscape of Barmer. In a classic example of a company adopting a long-range view of what their social commitments should achieve, Cairn India has launched ‘Samvriddhi’- a rural BPO initiative – in collaboration with RuralShores and Barmer Zilla Parishad. Cairn India is one of the biggest oil and gas exploration and production companies in India, with producing assets in Rajashtan, Andhra Pradesh and Gujarat. Samvriddhi, which directly impacts the local community around the company’s core business, aims to create economic independence among local youth, especially women, by providing them white-collar jobs in the IT-enabled services (ITeS) domain.

The programme provides customized courses that train local youth on skills required to work as data processors and call centre workers. It is especially targeted at women – Vidya is one of the students – thereby empowering them towards becoming financially independent.

The rural BPO project is the first of its kind in western Rajasthan and marks the entry of ITeS in the region. Today the BPO handles non-voice (data entry) and voice processes for telecom, insurance and banking clients. Employees are also equipped to handle non-voice processes such as indexing, image tagging (for online shopping), and data tagging-publishing.

Mahavir Singh, BDO, Baytoo, said, “Without the help extended by Samvriddhi, it would have been impossible for us to have the thousands of pension forms digitized on time. We look forward to working with them on other digitization works such as the Aadhar Project and NREGA project.”

Currently about 90 youths are employed through this programme, but a recent contract with a large telecom provider, which will make this one of the regional tele-customer-service hubs for the company, will see the number of people rise to 350. The BPO is a 90-seater facility and will employ 180 people in two shifts at peak operations.

With a glint in her eyes, Vidya speaks of the change that Samvriddhi’s center has brought about in her life. “Earlier we never got an opportunity to work on a computer but here I get to learn so many different things every day”. Currently she is completing her B.A. and has decided to work with the BPO after her studies.

The rural BPO has opened up new opportunities for the youth of Barmer in their own region instead of migrating to more industrialized neighboring cities, and aims to be a harbinger for greater positive change in the community.

The social impact of a rural BPO is huge as well, and serves as an example of how industry linkages can redefine mindsets about rural areas as delivery centres, and can be a parallel for larger government initiatives leading to faster talent development and revamped state-run schemes, all contributing to significant development in the region.

The project works in a public-private partnership model. The BPO building has been provided by the Barmer Zilla Parishad, Cairn has provided the initial capital expenditure and setup costs, and Rural Shores is the implementation partner.

Samvriddhi is an extension of Cairn’s ongoing wp initiatives towards creating local employment opportunities for the youth of Barmer. The Rural BPO is set up with the sole objective of creating a model which will ensure 100% employability for the candidates undergoing computer training and other vocational courses at the Cairn Enterprise Centre – another initiative being run successfully by Cairn India in Barmer district.

Practice Tests: Enhancing Your Chance at Success in Your CompTIA Security+ Exam