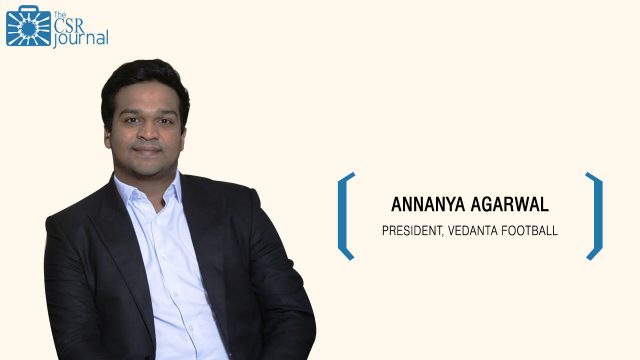 Despite the brickbats The Vedanta Group has been receiving from environmentalists, Annanya Agarwal is positive that the group is committed to continuously work towards improving quality of life of the communities in its operational areas. “Even though CSR is a mandatory activity under the Companies Act, we always ensure that we spend much more than the stipulated 2% – last year we spent as much as 9 times the required amount,” he told The CSR Journal in an exclusive interview.

A footballer himself, Annanya is passionate about developing grassroots football in the country. Excerpts from the interview:

What is Vedanta’s commitment to sports in the country?

The Vedanta Group is committed to transforming India into a global sporting powerhouse, with the vision of enabling every child in India to play and excel through grassroots programmes.

Vedanta shares the dream of millions of Indian football fans who want to see India on the world football stage, and with the aim of uplifting football in India, it has made a considerable investment on the development of grassroots football in the country.

The Group runs two state-of-the-art academies at Goa and Rajasthan and provides regular football training to over 2000 children through residential and non-residential programmes. The company’s focus on gender equality spills over to the football field as well – the Vedanta Women’s League in Goa has completed 2 seasons, featuring over 160 players.

The Group also encourages other sports through various initiatives: complete sponsorship of para-athletes at international Paralympics and other tournaments, grassroot development of archery in Jharkhand, hosting an annual squash tournament at Mumbai, and organizing an annual marathon at Jaipur.

How does Vedanta fulfil sporting commitments through CSR?

All of Vedanta’s sports programmes, both residential and non-residential, are part of its CSR activities, and are free of cost for all participating children. 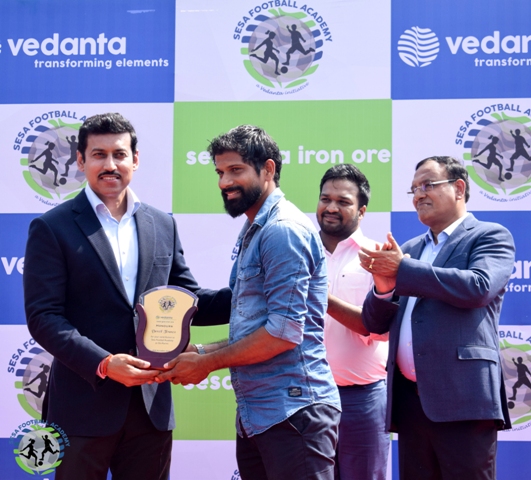 Vedanta established Sesa Football Academy in Goa in 1999 with a vision of becoming a premier academy in India, producing footballers for the national team from the state of Goa. The Zinc Football academy was launched in Udaipur to focus on Rajasthan – a marathon football talent hunt was undertaken with an aim to reach out to more than 50,000 children in 100 villages and tribal areas of Rajasthan over the next 5 years. The Group also has plans to expand its activities to the other states it operates in.

The theme of women empowerment is very dear to Vedanta, and the Group translated it onto the football field through the ‘Vedanta Women’s Football League’ launched with support from Goa Football Association. The league has already completed 2 full seasons, and saw participation from over 160 girls, a few of which have gone on to represent the national team as well.

Vedanta also sponsors Vedanta Squash India Open annually, to promote the game of squash. Two seasons have been completed, with the first season in 2018 featuring more than 30 players from 10 countries. In the second edition held this year, the focus was more on grassroot development, with the tournament featuring both boys and girls in the under-11, 13, 15, 17 & 19 age-groups at the national level.

What are the funds invested in sports programmes, and their impact?

Sesa Football Academy in Goa has a very rich heritage – set up in 1999, eight alumni from the academy have gone on to represent India, along with numerous others in the national I-League and Indian Super League. One of the players from SFA was offered a contract at a second division club in Spain.

Players who participated in the Vedanta Women’s League have also been selected to the national team and state teams at various age-group levels. Sesa Football Academy’s first team plays in Goa’s first division league, while the age-group teams participate in competitions at the national level. Sesa’s community outreach football programme covers 500 kids across 16 villages in Goa.

Vedanta’s Zinc Football academy in Rajasthan was set up last year at a capital cost of around INR 10 crores, with special emphasis on technology and data analysis to drive player performance. The academy at Udaipur uses F-Cube, India’s first ever technology-hinged football training programme.

Zinc Football was started with the mission of reaching out to kids across Rajasthan, and over 5000 children participated in scouting initiatives, and 2000 in Performance Evaluation Camps in the first year itself. Out of these, 32 players were selected for the residential academy; few among these kids have gone on to represent Rajasthan state team as well.

How could sports benefit children and youth in India?

We believe sport has an integral role to play in the growth of a nation. Sport can be seen as a microcosm for life. Playing sports imparts valuable life lessons to those who take it up, teaching them to ride the good times and weather the bad. With sports engagement, the children and youth in the communities get a positive direction in life, and stay away from ill habits.

With the growing popularity of sports in India through ISL and other leagues, sports is now a lucrative career option rather than a hobby or pastime. Even so, at our academies, formal education is given equal importance as football training, just so that our children have fallback career options. 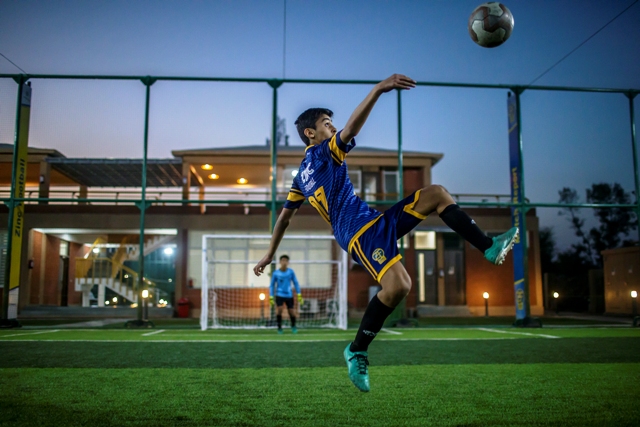 Vedanta also has a programme to coach the coaches – we assist ex-footballers to take up coaching, or other football-related employment.

You are a footballer yourself. How has the sport impacted your value system?

Being an entrepreneur and a footballer myself, I cannot stress this enough: “A healthy mind resides only in a healthy body”. At a very basic level, playing football (or any sport) gives you a chance to exercise your body and run around for 90 minutes without letting matters outside the field affect you. This helps your mind reboot, and enables you to think with more clarity when you next focus on your work.

Football being a team sport also offers ample opportunities to develop valuable life skills like coordination and collaboration, especially when the games get highly competitive. Communicating with my work colleagues effectively in stressful situations is something that comes naturally to me, thanks to my experience on the football field. 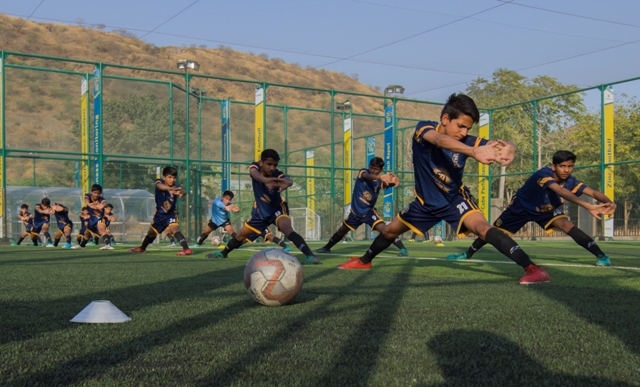 However, the one learning from football that has really helped me grow as a person is to leave everything on the field – try your hardest to win, but at the final whistle, whatever the result, always shake hands with your teammates and opponents.

This was true until quite recently. However, many corporates have realized the importance of sport and the benefits that it brings to people who impart themselves in the activity. Previously, the major involvement of corporates in sports used to be restricted to tying up with sports personalities as their brand ambassadors or the most popular sport in the country – cricket. However, in recent times we see many corporates taking interest in promoting football, hockey, badminton, kabaddi, marathons etc.

It is very encouraging to see that the dynamics of sport in our country has been dramatically changing. We at Vedanta strive to do our part by providing the much-needed platform and infrastructure to promote sport in our country. We believe that we have a lot of talent in our country who can achieve great heights not only nationally but on a global scale if nurtured in the right manner.

What does corporate social responsibility mean to you?

One of my earliest memories of my grandfather is of him taking a longer route to his workplace, to meet and greet some friends and distribute biscuits and water to them. While everyone around him would be hustling and bustling to gain material comforts, my grandfather used to be content just seeing the smiles on his friends’ faces.

These familial values have been imbibed by Vedanta’s policies as well. Our approach towards CSR is as quoted by our Chairman, my uncle, Anil Agarwal: “It is important to give back what we earn for the greater good of society. 75% of our wealth, which we gain as economic benefit, should be returned to society.”

The Vedanta Group is committed to conduct its business in a socially responsible, ethical and environment friendly manner and to continuously work towards improving quality of life of the communities in its operational areas. Even though CSR is a mandatory activity under the Companies Act, we always ensure that we spend much more than the stipulated 2% – last year we spent as much as 9 times the required amount.

How could companies work with the government to make India a sporting nation?

Companies can play an important role in supporting the government to inculcate a sporting culture in our country. The important aspect to promote any sport in the country is to develop the appropriate infrastructure, and corporates can play a huge role in this aspect.

Moreover, the focus needs to be on the grassroots level and the right platforms need to be created for children when they are of age. Government initiatives like Khelo India have been put in place for precisely this, and it is important for corporates to align themselves to these.

Vedanta is actively striving for our academies to be empaneled by Khelo India; our President is also extremely keen to provide support to the National Sports Development Fund (NSDF) as and when it is formulated.

The franchisee football model that has worked wonders in other countries could work in our country too. In this model, corporates (franchisees) own teams and the government/AIFF/state footballing bodies organize lucrative leagues (like the ISL) for these teams to participate. This helps establish a footballing culture in the country as well.

Thank you for reading. Your thoughts and inputs will genuinely make a difference to us. Please drop a line. 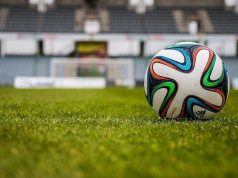 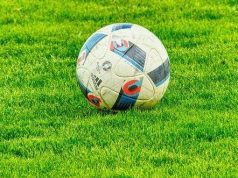