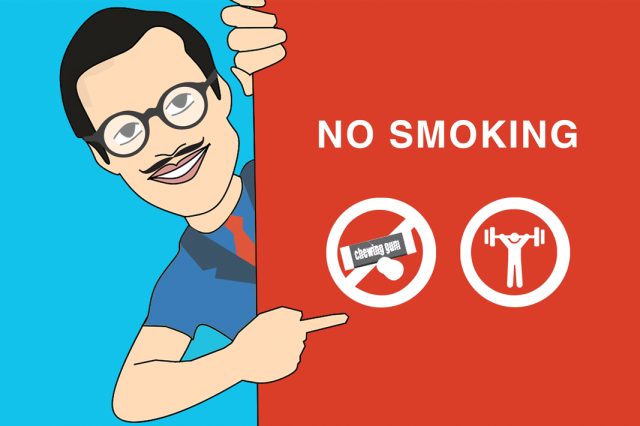 Sharmaji ka beta had heard many reasons as to why people smoked or started smoking. He also came across a weird perception that people had about smokers. A colleague told him, smoking allowed him to have an easy break at work whenever he wanted. He said, if he would take a break and use his phone or sit outside to read a bit, people would judge him to be lazy or under-performer at work. But if he takes more breaks for smoke, they would just say that he was an addict, but worked hard. That seemed more acceptable to him.

Sharma was really baffled by the confidence with which the smokers spoke about it. All of the explanations they gave about having this poisonous habit didn’t sound really strong enough. And some of the reasons were so intense; it was as if smoking is etched inside their psyche.

Not all of the people who smoked cared about quitting it. But many did. And so Sharma decided to explore the methods to quit.

Apart from some of the obvious methods that everyone recommends, like chewing a gum, wearing a nicotine patch, or switching to e-Cigarettes, Sharma came across many other methods which proved very effective for some people.

A friend told him, he quit smoking because his daughter asked him to. That was a reason enough for him to go through the painful process of quitting.

Some people had formed a group who would get together every morning to do Yoga, cardio and some breathing exercises to quit smoking and help each other do the same.

A friend recommended taking up hiking. He explained that, the adrenaline rush and the peace one gets after climbing a hill is addictive on its own. And when you start climbing to higher and higher altitudes, you realize, smoking is not allowing you to do so. Therefore you choose to give up one addiction cold turkey. He said, for him hiking was definitely a bigger addiction than the smoke.

Sharma liked the ideas and shared with some of the people who did smoke and wanted to quit. But they didn’t work so effectively for them. He came to a conclusion that quitting smoking is something very personal. No matter what you do, or try, one cannot quit without self-realization.  But then the question was, ‘how to help people come close to that?’ He wondered, if the efforts taken by the government by banning smoking in public places, or advertising its harmful effects, enough?

Sharma is still at an impasse. He is asking, “Is there any one solution possible for this?”

Share your thoughts with us, to help Sharma come to some solutions with which he can help people to quit smoking, or to help them realize that they should.

Benefits of Owning An Exercise Bike At Home