After covering the two P’s – Periods and Pedestals, my third article is on Parity.

Like most of the important things in life, parity too begins at home. While I took the liberty of saying that it begins at home but by “home” I actually mean it in the broader sense of society. The parity that society encourages finally reflects at workplaces.

We all know of many examples around us that blatantly highlight the complete absence of parity amongst the two genders which I am deliberately trying to refrain from reproducing in this article. Instead, my attempt will be to open up our eyes for observing the not so obvious cases of disparity and investigate the reasons behind them.

After publishing my book “We-Men@Work”, which attempts to shift the conversation at workplaces from Gender Equality to Gender Neutrality, I e-met a lot of interesting people who were either “for” or “against” the proposed idea. One person who could relate to my thought is Nikunj Kulshreshtha. Nikunj had written his LLM thesis advocating gender-neutral rape law in India. Here I reproduce a particular part of his work that throws light on an interesting aspect –

“Thus, by playing one woman against the other, patriarchy ensures that their individual power is never threatened. It was kind of an implicit understanding where men would share power with women, under their tutelage, to exploit women and men of lower caste. In order to retain these privileges, women are constantly renegotiating their bargaining powers even at the cost of other women. This arrangement was described quite graphically to the author by a rural woman. She said that in our society, men are like the sun with all resources such as financial, mobility and the freedom to take decisions whereas women are like satellites without any light of their own. They only shine when they are close to the sun and this induces constant competition with other women to have a bigger share of resources. Without the sun (man) the woman`s life would be barren, dark and end quickly.”

The author being referred here is Kamla Bhasin who had coined the concept of ‘paternalistic dominance’ in her book “What is Patriarchy?”

While I am mostly concerned with workplace biases, the mammoth reality of society cannot be ignored. I often say that gender biases are gender unbiased in nature. The real reason behind this gets uncovered once we investigate the “why” of that statement. If resources (like women in leadership roles) are perceived to be limited, fight for them will get personal. The funnel of workplace resources, right from the very beginning, is skewed towards male and it just worsens as seniority increases. There is an inherent expectation of society from men. They are assumed to be chief bread earners while on the other hand women play the role of supplementing the household income. This logic then extrapolates itself to imply that men’s career need is more basic in nature and so their commitment to work will be higher. Society seldom gives them the chance to take a break or be a homemaker. Women get these liberties just by the virtue of being a woman even if they are highly educated.

As the workforce generations move from pursuing living to standard of living to quality of living, society will open up to accept the idea of working for the love of work, for the need of self-expression, for the want of evolving along with the monetary aspect of it. Thus the fight for parity is not only between two genders, but it is also within the same gender given the context of the society.

Let us move on to a specific area of clothing from here. The history of pockets (or the lack of it) in women clothing, is very intriguing. In “Lean In”, Sheryl Sandberg points out that early on the women formal wear evolved into something similar to men’s wear in an attempt to blend in. No one wanted to stick out as different once in leadership roles. Accepting differences between the genders has been always been projected as accepting weaknesses and thus the tiring race of equality began between apples and oranges.

Interestingly, even in the formal suits the pockets provided were fake or lacked any depth to be of any actual use. One of the human species’ great evolutionary advantages has been the creation of tools and pockets in its most rudimentary form provides a space to carry these tools to be used as per requirement. Easy access to these tools, which have evolved from generation to generation, makes life secured and comfortable. I heard a podcast on Pockets where Hannah Carlson, a lecturer at Rhode Island School of Design, stated that pockets symbolise preparedness and your ability to move in public and be confident. Any other arrangement, outside pocket to keep things can be stolen while pockets are a part of you.

Pockets are the perfect metaphor for the privilege and in this seemingly small yet enabling feature of clothing, there exists zero parity. It was not like this forever, in fact in 17th-century women had huge pockets but till the time we entered 19th century looking good took precedence over comfort. Lack of pockets symbolised being carefree with nothing to carry consistently. This catapulted into an average of 24 pockets for men, making him more and more responsible and pseudo slits for pockets for women ( forcing the handbags to make a prominent entry) in around 1944.

Recently I have come across some good news though. Aseem, a venture by a lady named Swati Singh, has patented a much-needed design. Saree with pockets. You heard it right. Now we have the option of wearing a Saree and still keeping the essentials like the mobile phone/keys/cash; tucked away in a pocket. More than a design solution, I feel it is a “statement” that was long due.

When a woman either breaks out or stretches from her so-called “basic” gender role to work in a professional set up, she earns money. While when a man extends to become an equal partner back at home, his actions are not quantified. He gets a taste of what women have been living through since ages. Additionally, the society discourages him from even discussing his contribution back home with pride. The reactions to both the gender’s act of extending their (dated) roles lack parity. With that as context let us now transition from society to the workplace.

In interviews, single women are typically asked about their marriage plans. More and more men continue to shift cities for their spouse’s career but they still don’t face the marriage plan question as often as women do. Similarly, a new mother is often asked about her struggles of working with an infant/toddler yet I don’t know a single new father who has been asked this question in an interview. Fact is that in absence of gender-neutral policies, barring exceptions like IKEA, new fathers join office within one week of the child being born while the sleepless nights go on for months after that. Our generation is shifting from cameo father roles to being an equal parent but workplaces are hardly keeping up with these shifts.

Now for some hard-hitting figures. As per the Monster Salary Index report of 2017 (IIM Ahmedabad research partners), the average gender pay gap by tenure is embarrassingly above 15% for 6-10yrs of experience and a disturbing 25% for more than 11yrs of experience in India. The reports released a post that is no better. These are just the output metrics of all the aspects (and many more) discussed above.

Thus for a workplace to reflect parity we need to push the envelope aggressively at our homes. There is immense power in the words that we choose to communicate with our kids, the toys that we give them to play with, the kind of dresses that they wear, the hobbies that they pursuing, the colours that their rooms are painted in – it will all eventually add up to bridge the pay parity.

Sanchita Ganguly is a marketing professional with experience across agencies and multiple leader brands. Her decade and a half long professional journey inspired her to author her debut book “We-Men@Work” that intends to trigger conversations around gender neutrality at workplaces.

To read more stories by the author, click here. 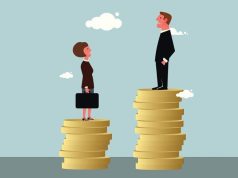