On Women’s Day, we salute strong women like Bollywood actress Manisha Koirala, who has battled cancer and is now doing everything she can so that others can stand up to it.

She wrote the book Healed, which deals with Koirala’s journey through cancer, the intricacies of the disease and the treatment involved, so that people “can learn from the mistakes I made and prioritise one’s health by eating well, doing exercise, being active and above all by being a happy person”, she said in an interview to The Week. Through her journey, she unravels cancer for us and inspires us to not buckle under its fear, but emerge alive, kicking and victorious. 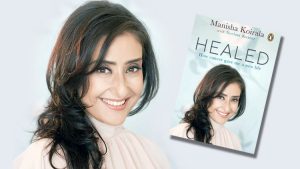 Koirala addressed the students of Cotton College who gathered in front of their institute: “Deepsikha Foundation is doing tremendous work in fighting the cancer menace. I am doing my bit to spread the message that tobacco is harmful and should be avoided,” she told The Telegraph.

Deepsikha runs a hospice for terminally-ill cancer patients at Mirza, a home for cancer-afflicted children at Six Mile here and conducts awareness camps in interior areas of the state and the region. Two more facilities for cancer patients are coming up at Titabor town near Jorhat and Dibrugarh.

Koirala’s book, Healed, was available at the Brahmaputra Literary Festival and also at Tochi Raina’s concert at Deepsikha’s fundraiser Preetir Enajori. Proceeds from the book’s sale go towards Deepsikha’s work for cancer care and awareness, the actress said. Koirala dedicated her book to the cancer patients of the Northeast at the Brahmaputra Literary Festival and participated in a discussion on her book and her personal struggle against the disease at the fest.

Koirala, who was diagnosed with ovarian cancer and underwent treatment in the US, emerged triumphant after a long and painful struggle.