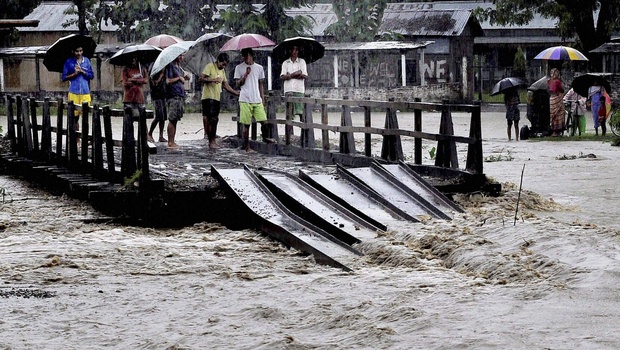 Mushalpur, Jan 25: A nondescript insurgency afflicted village in the foothills of Bhutan in Baksa district has emerged as the first ‘Smart Village’ of the Northeast.

Life at Barsimlaguri, about 18 kilometer north of Nalbari town, has changed a lot ever since the implementation of a corporate social responsibility (wp) initiative that set to naught the classical characteristics of a poor village.

After convincing a leading financial PSU for a wp initiative in the village, the Nanda Talukdar Foundation moved in systemically to work primarily in four verticals  with full technical and organizational support from Anirudh Goswami of New Delhi.

“The verticals are alternative energy, sanitation, clean water and skill development besides a horde of other interventions ranging from waiting bus stand to school kits and playground improvement,” said NTF secretary and senior journalist Mrinal Talukdar.

“It was found during the baseline study that villages need urgent intervention in all the verticals and surprisingly 95 per cent of the villagers did not have proper sanitary latrines,” said Talukdar.

“We moved in by first setting up a Project Implementation team under Surajit Dutta, who had quit high paying IT jobs at Bangalore to work in the villages. His personal sacrifice made the work easy for us. The first move was to construct 100 toilets and the Reverse Osmosis (RO) water plant,” said Goswami who coordinated the operation from New Delhi.

Braving the initial challenges of logistics as well as quality manpower, the construction of 100 toilets started and had to be completed in three phases as it was slowed down by the heavy monsoon as well as slow supply of raw materials in the deep interiors.

“But the best part was the first phase intervention of the RO plant as the village became the first one in the whole region to have such a plant producing mineral water at the rate of 500 liters per hour. It was especially a huge success as the villagers were having iron-laden water resulting in chronic stomach problems,” said Talukdar.

Now the Village Development Committee (VDC) has taken over, charging Rs 120 per month from each family for 20 liter of water – which works out to 30 paise per liter. From that money, the VDC has engaged a caretaker and the remaining money is being used for maintenance and expansion work. However, the brightest part was the solar component as 100 houses were given solar kits and another 75 streetlights were installed, making the village a neighbour’s envy.

“Now, the whole village is illuminated at night and passing vehicles as well as people stop by to see the difference,” said Dinesh Bhuyan, president of the VDC.

“Moreover, the project has also improved the drinking water facility of three schools in the villages, constructed bathrooms for girls, supplied playing kits and also encouraged meritorious students of the villages, besides holding art melas on Environment Day,” said Deepu Chaudhury, secretary of the VDC.

“It is now time for us to pack up. We have identified another village in Jorhat district at Jajimukh. The hunt for a sponsor will begin and that is the most difficult part,” said Talukdar.