Chhatrapati Shivaji Maharaj is revered throughout Maharashtra as a great king, and respected the world over for his guerrilla tactics in warfare. He was born on this day, February 19, in the year 1630 at Shivneri Fort. Shivaji Jayanti 2020 marks the 390th birth anniversary of the man considered the greatest Maratha ruler.

As the nation commemorates his birthday on the eve of the World Day of Social Justice, The CSR Journal takes you through the stories of the social justice and religious tolerance that marked his liberal civil rule.

Shivaji believed that the welfare of subjects was the responsibility of a ruler. Even though he fought so many battles, he never burdened his subjects with extra taxes. Even the expenditure for his coronation was covered by a tax on the collectors.

In a letter he challenges, “It is true that I’ve deceived many of my enemies [Aurangzeb, for example]. Can you show an instance where I deceived a friend?” This challenge remains unanswered.

Shivaji was not a mere warrior. He funded establishment of new villages, set up tax systems on the farms, used the forts to store the farm produce, gave loans to farmers for the purchase of seeds, oxen, etc, built new forts, had the language standardised to facilitate intra-government communication, had astrology revived and revised.

His land reforms were revolutionary which further brought his subjects emotionally closer to him. He took care of their material needs, which is of the utmost importance. He also started the system of paying wages in his army.

It was not to oppose the Muslim religion that Shivaji fought against the Mughals. On the contrary, he had a deep love and appreciation for all religions. He once said that Hinduism and Islam are manifestations of the same divine spirit, and he used to encourage everybody to practise their own religion.

A story goes that a man wanted to examine Shivaji’s religious tolerance, so he threw a Quran at Shivaji in court. Shivaji took the Quran and held it very devotedly and respectfully. He happened to see a Muslim standing at a distance. He called for the man and presented him with the book, saying, “Please take this book. It is your most sacred text. When I hold our Gita, I feel it is so sacred that I must become very prayerful and spiritual. When I hold your Quran, I have the same experience. Now you should take this book and revere it.”

Shivaji was a dependable supporter of women and their honour. He opposed all kinds of violence, harassment and dishonour against women. Anyone under his rule caught violating woman’s rights was severely punished. In fact, women of captured territories were also released unharmed, and with integrity.

Once his Maratha soldiers defeated a certain division of a Muslim army. Shivaji’s commander was supposed to bring the defeated Muslim leader before his king, but before he did so, he brought the Muslim leader’s beautiful daughter. He urged Shivaji to take the young girl as his wife.

Shivaji’s commander interrupted his reverie. He said, “O King, either you can marry her or you can give her in marriage to your son.” Shivaji said to his commander, “Let me pray and meditate.” After meditating, Shivaji said, “What has this young girl done to me that I should take her from her family? Her father is my enemy, true; but if I take her away and marry her, or if I ask my son to marry her, will she be happy? At this very moment, the poor girl is so afraid that I may kill her father or put him in jail for life… No, I cannot add to her sorrow.”

Shivaji sent the young girl back to her father with a bunch of opulent gifts. He said to her, “You will not be harmed. The fact that your father lost to me in battle does not give me the right to come between him and his beloved daughter. So you take these gifts and go back to him, with all the blessings and love of someone who feels for you as a father feels for his daughter.”

Rather than making jingoistic noises and holding up traffic, let’s try to imbibe some of the good qualities of this great leader on Shivaji Jayanti 2020. 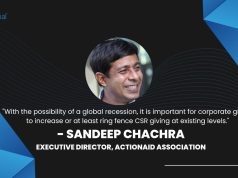