Have you heard of Victory Gardens?

During the Second World War, folks were encouraged to create backyard vegetable and herb gardens to have local produce when German bombing and blockades stressed the supply lines. Canada had created these too during WW1 — these were called Victory Gardens or food gardens for defence which defined colonial home design for decades to come. We see the same in old British bungalows which served as official residences — growing food was built into their design and space left for the same.

The world is at war with COVID-19, everywhere. Supply lines are stressed across the world — worse in places with food coming from elsewhere. Most cities today are completely dependent on that perspective, and in some cases entire countries are as well. The economy is also in deep recession across the planet at an unprecedented scale. It’s unlikely that industrial agriculture will be able to supply enough food to all, and even unlikelier that most will be able to afford it! In terms of nutritional value and diversity delivered, it was already falling short of what the planet had created as options for us all.

In times like these, the need for local food supply chains becomes very critical, and obvious as well. Food from your yard, or garden, or terrace, or maybe a community garden close by is accessible and cheap. But this isn’t always practical for all in the city right away, and the next step is a direct, closer relationship with farmers close to town. The closer your food comes from, the fresher it will be, and the supply chain less prone to global logistics disruptions. Eating food that is relevant to and grown in the neighbourhood also helps the local community and is healthier too.

Large farms, big agricultural businesses focus on a few ingredients and try selling you a variety of processed foods made from essentially the same things. Large monoculture farms and regions are more prone to climatic shocks, pest attacks and other variables. Scaled logistics end up creating longer supply chains further away, biased towards moving larger volumes of fewer kinds of produce, optimised for costs and taxes and not for your health, or reliability in times of disruption. Big buyers drive prices down for the growers, drive farms towards consolidation and being fragile monocultures. Large stores have already led to more processed, packaged food, and overall reduced choice for us collectively.

In the current situation, they are also tougher to get to and carry more risk. In countries such as India with a wide network of small kirana (general) stores, it’s a lot more feasible to just walk to the store, and crowd it less as well. The smaller farm, the more localised logistics and distribution via smaller stores, the more reliable and robust your food supply and the healthier and dependable the local economy.

Being a more informed consumer who makes smarter choices when at a retail outlet goes a long way, but it is even more useful to get involved at the farm. Community Supported Agriculture models, farm to fork cooperatives and Farmer Producer organisations are a growing, but still tiny part of the food chain that will play a huge role in how we get our food in the coming years. It is a very smart long term move to have some level of investment and skin in the game by getting involved in these FPOs, cooperatives or collective farms, and ensuring more, healthy and local food production happens at scale.

Getting involved with and supporting small farms as direct consumers, rather than go via large buyers and the food industry ensures the diversity of produce which is great for the consumers’ health, great for the land and a lot more fail-safe for the farmer.

Today there are numerous experiments and models in play in the farm to consumer space and a lot of these can be encouraged and grown to enable better food security especially in times of such crises – be it pandemics, major weather events that are getting more frequent everywhere or even global disruptions because of political considerations and actions. The key to more resilience is a lowered dependence on energy, more diversity at the farm, and fewer layers and lesser abstraction between producers and consumers.

And even as you help in small ways and big to get there, don’t ignore the micro-greens you can start to grow and eat in just a week, in your own balcony. 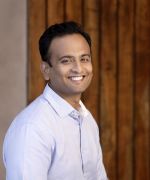 Sunith Reddy co-founded Beforest in 2018, which is a unique idea of creating ecologically sustainable and economically self-sufficient natural food forests that are managed and owned by collectives and managed estates. Prior to Beforest, Sunith has been one of the founders of RentSetGo, iRageCapital and Quantinsti. He was also the director at Carbon Zero. He is an IIT-M alumnus and his decade-long career began at Yahoo!

Technology and innovation are key to bolstering food security in Asia, experts say