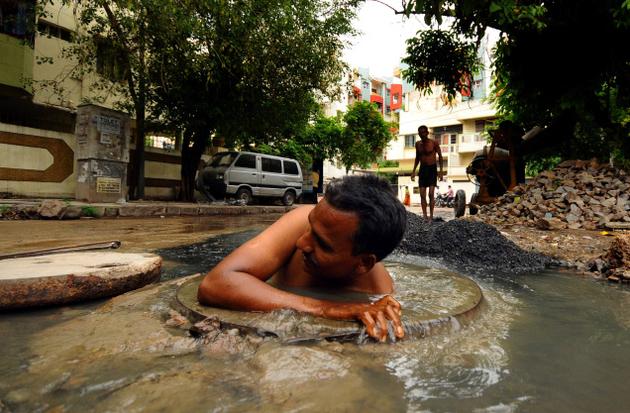 “In no country, people are sent to gas chambers to die,” remarked the Supreme Court of India in September 2019 regarding manual scavenging in India. Statistics have suggested that it is safer to be a soldier in Kashmir than a manual scavenger in India. Quartz India has pointed out that manual scavenging has claimed more lives than the terrorists in the country. This is even after the law that made it mandatory to use safety equipment before taking up cleaning of a sewage or a septic tank. Despite working in such risky conditions, manual scavengers in India, unlike the soldiers, get no respect and are subjected to discrimination and mistreatment.

Manual scavengers, without any regard to personal safety or health, enter the sewers to clean the septic waste generated by all of us, allowing us to enjoy a safe and clean environment. More often than not, they are not equipped with the safety gear recommended by the top court of the country, which causes severe health issues for them. In addition to this, they face social exclusion because of their nature of work, and their family is also subjected to humiliation. To this also, the apex court has questioned whether untouchability as a practice has really been abolished in the country.

Who is a Manual Scavenger?

Any person who has been employed to handle undecomposed human waste from an insanitary latrine, open-drain or pit or railway track is a manual scavenger under Employment of Manual Scavengers and Construction of Dry Latrines (Prohibition) Act, 1993. The person could have been employed by any one – for example, someone from their village or by an agency or contractor. It does not matter if she was given regular employment or engaged on a contract basis, she is covered under this law.

However, any person who has been employed to clean human waste and does so with the help of the appropriate protective gear and equipment will not be considered a manual scavenger under this law.

Another group of people called ‘safai karamcharis’ are also sometimes considered as manual scavengers – however, they usually refer to people working as sweepers or cleaning workers in the municipalities, government or private organisations.

What is Manual Scavenging?

Manual scavenging is the act of cleaning sewers or removal of waste from toilets without the use of safety equipment. In simple terms, untreated human excreta are removed from pit latrines or bucket toilets using buckets or shovels by hand. Manual scavengers use basic tools such as a bucket lined with a sack and a handle. The worker then carries the waste manually and takes it to the disposal sites.

Manual scavenging is regarded as inhuman and a violation of the law. It constitutes problems that encompass domains of health and occupation, human rights and social justice, gender and caste, and human dignity.

The Prohibition of Employment as Manual Scavengers and Their Rehabilitation Act, 2013

According to The Prohibition of Employment as Manual Scavengers and Their Rehabilitation Act, 2013, it is an offence to:

Not demolish or convert insanitary latrines within a certain period of this Act coming into force.

Causes of Manual Scavenging in India

Less number of waterborne latrines: In India, in the urban areas, the major type of latrines used is the dry latrines which are a major cause of manual scavenging. A report by Housing-Listing and Housing Census, 2011 indicates that there are approximately 26 million insanitary latrines. Moreover, in rural areas, there are no strategies put forward to convert dry toilets.

Lack of proper rehabilitation and employment opportunities: In India, the problem of manual scavenging persist because of the inability of the system to fully rehabilitate the sanitation workers. Lack of employment opportunities is a major concern and a crucial player in the inclusion program. In addition to this, there is no specific government initiative to address the plight of the families of manual scavengers, not allowing their problems to get addressed in the mainstream.

Social stigma: People regard the manual scavengers as untouchable because of their work. Therefore, society is not ready to accept and include them in community activities. No employer offers them a job and also, landlords bar them from renting their houses.

Health issues: The scavengers often work in unsanitary conditions. They are exposed to gases such as hydrogen disulphide, carbon (IV) oxide, ammonia, and methane. Long exposure to hydrogen disulphide can lead to death by asphyxia. The individual may also experience epileptiform convulsions and may fall unconscious and later die. The gas is also associated with visual acuity.

Caste and gender discrimination: Most of the manual scavengers are women and members of the marginal class. They are allocated a caste which is regarded as a lower class and is excluded from moving to a better occupation. As a result, the scavenging work is seen as part of their natural occupation. Therefore, the marginal caste from rural areas moving to urban areas to seek a better livelihood also mostly end up in the same occupation.

Social discrimination: Most manual scavengers are stigmatized by the community due to the nature of their job. They are regarded as untouchable and they are forced to accept their condition. This problem is much deeper as their children are also discriminated and forced to occupy the same work as their parents.

Proposed Amendment to ‘The Prohibition of Employment as Manual Scavengers and Their Rehabilitation Act, 2013

The recent data released by the Ministry of Social Justice and Empowerment has brought to light the fact that manual scavenging has led to 376 deaths in the last five years. It has also mentioned that the practise led to the death of 110 persons in 2019. The data has highlighted the discrepancies in the prohibition of manual scavenging law. In order to correct them, the government of India has proposed to amend the Manual Scavengers and their Rehabilitation Act, 2013.

The government proposal for amendment of the manual scavenging law aims at mandating the use of machines for cleaning sewers and septic tanks. It has stated that the word “manhole” will be replaced with “machine-hole” in all the official government documents. In addition to this, the proposal has stated the need to install a 24×7 national helpline to report violations which will help the government ineffective monitoring and ensuring compliance.

The replacement of the word ‘manhole’ with ‘machine hole’ symbolises the government’s intolerance towards the practice. While these are strong words, they are merely symbolic in nature. It clears the intent of the government of eliminating the practice. However, they do not do much for enforcement.

Addressing the problem of Manual Scavenging in India

Top to Bottom Level Involvement: In order to tackle the problem, it would be necessary to involve all the major skate holders of the community to get involved. From district magistrate to local community members, it is important for everyone to participate in the eradication of the practice, removing social stigma and rehabilitate the manual scavengers.

Creating Awareness: There is a need for people to understand the repercussions of usage of dry latrines. District Nodal Officers, NGOs and health officers should educate the community on devastating effect caused by them. They should also educate the mass on health issues, hygiene practices, and sanitation. Government officials should inform on the legal implications that are related to engaging in scavenging and having dry toilets.

Rehabilitation and reintegration of Manual Scavengers: Creation of more employment is one of the most important measures for the rehabilitation of the manual scavengers. It is important to make sure that the manual scavengers are provided with a sustainable and appropriate job. The jobs created for the purpose must also provide equal opportunity to the locals. This way, the marginalised scavengers can get a second chance at re-integrating with society.

Enforcement of law: There is a need for strong enforcement of the law that prohibits scavenging. As such, the practice of Manual scavenging has been prohibited since 1993. However, the Governmental institutions are reluctant to act on this and are going to great lengths in denying the existence of manual scavengers.

Investing in proper human waste management equipment: In order to free the scavengers from the shackles of this practice, the government should invest in pieces of machinery that can be used to clean ditches and septic tanks. They can import the pieces of machinery or tools in case they are not locally available. Also, the government can provide sanitation workers with quality protective gears.

India’s rail coaches have toilets that drop excreta straightaway on the railway track. This waste is then cleaned by the manual scavengers who are employed by contractors who have tendered at the lowest price. The fact of the matter is that if a banned activity is practised in upon by the largest government entity in India then it’s practice in other strata of Indian society will be rampant.

Organisations Working to uplift the lives of Manual Scavengers in India

Jan Jagriti Aawahan Bahuuddeshiya Samiti (JJAS) – JJAS works to empower manual scavengers by running a school/daycare facility for their children and other marginalised communities in Nagpur. The organisation was started by a couple who came from a family of manual scavengers but did not appreciate the differences and discrimination their family and community were subjected to.

With an aim to uplift the lives of their fellow community members, the organisation works to empower manual scavengers by running a school/daycare facility for their children and other marginalised communities in Nagpur. They raise awareness about the rights of manual scavengers, conduct skill development programmes for them, organise health camps and clinics alongside other NGOs and government agencies. They also assist youngsters who want to transition from their caste occupation and find alternative sources of livelihood.

The non-profit gives utmost importance to education. Thus, in 2008, JJAS started the Shining Star Convent School in Nagpur, an English medium school with classes from Nursery to KG-2. Currently, there are nearly 50 students in this school.

Apart from educating young children, the organisation also conducts awareness workshops for their parents. The workshops help them understand the bane of untouchability better, the history of their community, how they can address discrimination on a daily basis, the legal tools at their disposal and how they can encourage their young ones to take up different occupations once they grow up.

Jan Sahas Organisation – Over the past 16 years, the foundation has rehabilitated 31,000 manual scavengers and bonded labourers across 200 districts in 18 states. The foundation assists the rescued manual scavengers by providing financial support. It has also launched an initiative called the ‘barefoot paralegals’, through which 65 per cent of the former victims of manual scavenging were trained to become advocates who would stand and get justice for others. Through their efforts, there has been a sharp increase in the rate of conviction in sexual crimes against Dalit women, from two per cent to 38 per cent in just a few years.

CSR initiatives for the benefit of Manual Scavengers

The project aims at providing safe, hiding and humane working conditions for the sanitation workers. The notable visionary and the philanthropist also urged the citizens of India to participate in #TwoBinsLifeWins campaign which requires them to segregate their biodegradable and non-biodegradable waste to help reduce the burden on these hardworking men and women.

Robot Bandicoot – Raheja Corp – The Greater Hyderabad Municipal Corporation (GHMC) has procured a manhole-cleaning robot called ‘Bandicoot’, which would help end the practice of manual scavenging. The key features of the machine include a complete robotic solution for eliminating manual scavenging and “cleaning sewage in a world-class manner using four advanced sewer cameras which work in day and light. Raheja Corp as part of its CSR initiative funded the project of procurement of the robotic machine at an estimated cost of Rs 32 lakhs to avoid manual scavenging.

This needs to be replicated across the country to finally abolish the practices of Manual Scavenging and Untouchability. 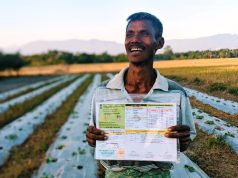