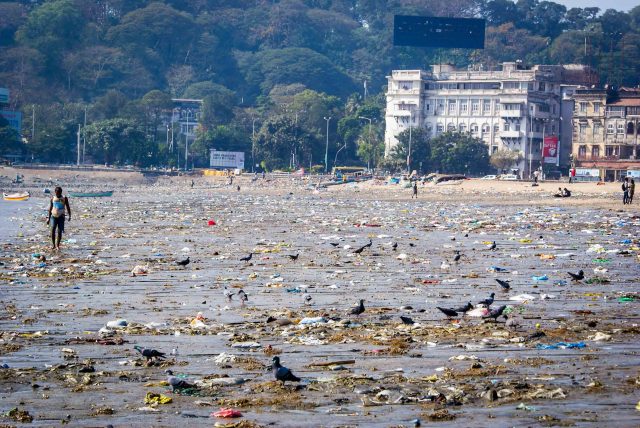 For 109 weeks, a UN Champion of the Earth, Afroz Shah, had been cleaning an entire beach in one of the busiest cities in the country. Mumbai is one of the top five highest producers of garbage in the world. According to a Bloomberg report, Mumbai will get buried in its own trash in a few years’ time. We produce between 8000 to 11,000 metric tonnes of waste per day according to various reports. One-third of this is wet waste. Due to improper waste management in the city, most of this trash is dumped into the ocean, which pushes it back on the shore. This leaves the beaches filled with toxic waste, becoming the root of many problems.

A lawyer residing in Mumbai, Afroz Shah, realised what a catastrophe this is and began cleaning the beach with his bare hands. He started alone but soon there were hundreds of people, including celebrities and artists, who joined hands with him and began to clean the beaches. He inspired many people to work towards the cleanliness of our water bodies. He stressed on the interdependence of humans and nature and the need to maintain a waste-free environment. But all his effort came to a grinding halt when a few goons beat up the volunteers who were working at the Versova beach. An incident like this was sure to dampen the spirit and intention of people to do good for all. Neither the state government nor the police intervened in this matter.

In a tweet, Afroz Shah expressed sorrow for having failed at this task he had taken up several weeks ago and apologised to the earth and people who believed in him. After this tweet, many from the film industry, like Dia Mirza and Richa Chadda showed their support to Shah, requesting him to continue. Seeing the support pour in for him, Aditya Thackrey tweeted soon after, requesting him to continue his momentous work and that the Sena would ensure the safety of him and his volunteers.

Finally, Minister of State for Housing & Urban affairs, Hardeep Singh Puri, tweeted saying that the government will look into the matter and make sure that local governing bodies also rectify the situation as soon as possible.

What happened with this well-meaning environmentalist can happen to anyone. What was he doing that warranted an attack of this manner? The more pressing question is, what can the government do to avoid such incidents? This should not be a matter of just politics, criticism and vocalising support to Afroz Shah. The government must see its support through till the very end. If it hasn’t been able to erect a working garbage management system, it can at least protect the people who are working towards it. A good effort should not be lost amongst crime, hypocrisy, lack of governance and political elements.

This young girl changed the way her village cooks food