Year by year, expenditure in the corporate social responsibility (CSR) realm is increasing. CSR spending this year increased remarkably by 22% from 6,800 crore last year to Rs 8,300 crore in fiscal year 2016. Moving closer to the mandate of two percent, the average spending rose to 1.64% in fiscal 2016 as compared to 1.35% last year, a report prepared by Crisil Foundation stated.

The mark of Rs 8,300 crore in fiscal 2016 is short of another Rs 1,835 crore needed to be spent for the average to achieve the mandated two percent. Of this, as much as Rs 5,300 crore – or Rs 1,175 crore more than fiscal 2015 — were spent on CSR activities linked to education, skills development, healthcare and sanitation, which are also the government’s priority areas.

“This public-private complementarity is great to see because, as a percentage of total government expenditure, India spends significantly less than what other BRICS nations do. So the private sector ramping up where government spending is low is truly synergistic CSR,” said Ramraj Pai, President, CRISIL Foundation. 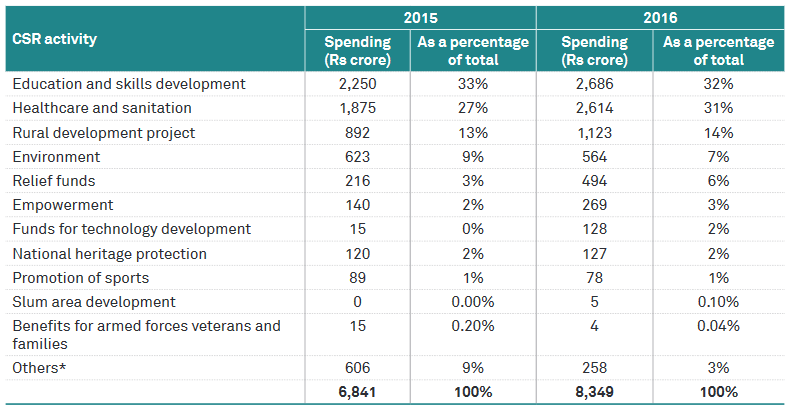 While education and health sectors had more money flowing in from CSR funds, environment, sports and benefits for armed forces veterans and families were at the losing end.

The CSR funds spent in environment sector reduced to Rs 564 crore in fiscal 2016 from Rs 623 crore last year. Funds spent for promotion of sports too dipped from Rs 89 crore to a mere Rs 78 crore. 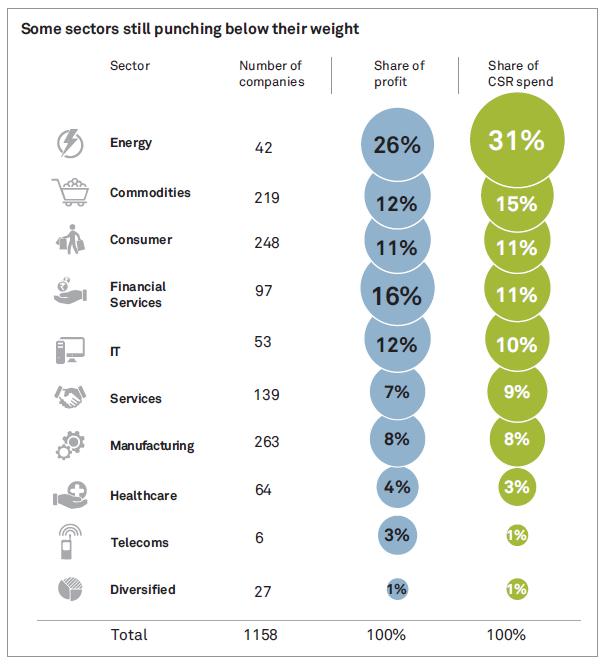 The Energy sector shared the most part of the CSR expenditure. Commodities and Consumer Goods sector too fared well. In fiscal 2016, more than half of the companies spent 2% or more, except those from telecoms and IT. Commodities and diversified industries stood out, with 60.2% and 59.2%, respectively, of companies in the sector spending two percent or more. Telecoms performed poorly with nearly half of the companies spending less than one percent.

The Financial Services, IT and Telecom sectors, which generate a third of the net profit of listed companies, have been rather parsimonious.

“A standout feature last fiscal was about focus shifting to CSR outcomes. This is indeed the way to go, as underlined by the ‘Effective Altruism’ movement worldwide where, instead of doing what feels right, find the best causes to work on by using empirical evidence and analysis,” said Ashu Suyash, Managing Director and CEO, Crisil.

There were 133 companies that either didn’t spend any amount, or were still freezing their CSR agenda. But even that is an improvement given that 200 companies were in the same boat in fiscal 2015.

“Of the 1,024 companies that figured in our analysis last year, 917 continued to meet the CSR criteria in 2016. Nearly two-thirds of them increased their CSR spend, while one-third reduced. Encouragingly, 56% of them spent 2% or more compared with 50% in fiscal 2015,” the report read.

In fiscal 2015, smaller companies had spent relatively more, but in fiscal 2016, the larger ones have done well with more than half of them adhering to the 2% mandate versus approximately a third previously.

There were two reasons for the 22 percentage point jump in adherence by the larger companies: one, they are overcoming the challenge of large-scale interventions, which takes more time and effort. And two, they are using implementing agencies, mainly non-governmental organisations, for execution. 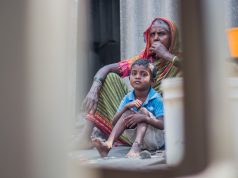 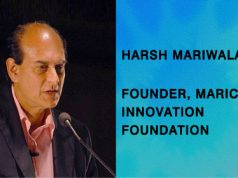 It Is Important To Collaborate As Part Of An Ecosystem: Harsh Mariwala, Chairman, Marico Innovation Foundation 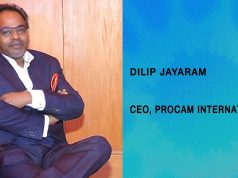