Climate change is impacting the life of every individual in one or another manner. We read about its impacts, causes and question our leaders about the actions being taken to prevent it. We often wonder, how can we contribute in fighting against this. The answer is – crowdfunding.

Several environment, waste management and pollution control related projects are now gaining popular support from crowdfunding. By participating in this movement, individuals can not only fulfil their responsibility towards the environment and society but also help many others realise the same. In this context, have a look at the following two crowdfunding campaigns.

An international ultramarathon runner, explorer, author, and marathon coach Atul Kumar Choukse is attempting to run a marathon, ‘Run for the Ganges’, a marathon of more than 3000 km marathon. Supporting his journey, Crowdera is holding a campaign to raise funds for this marathon.

The 3000 km marathon had started on 31st October 2021 from the Gangotri Glacier, the origin of India’s holy river, and is destined to reach the Bay of Bengal. This whole journey is estimated to be of 90 to 100 days. In this journey, Atul is carrying a trolley of 150 kgs of luggage tied to his shoulders and waist. A tent, medical kit, solar panels, laptops, GPS equipment, sleeping bag, other survival equipment, etc. are included in the trolley.

Appreciating the act Chet Jainn, CEO, Crowdera said, “Spreading awareness regarding the deteriorating condition of the Ganga becomes more important at such crucial times of pandemic and when the country is facing so many ailments. We need to spread the word about the measures that every individual can possibly take to conserve biodiversity and our holy rivers. We feel overwhelmed to conduct the campaign on our platform.”

In this journey, the goal is to reach Ganga Sagar (West Bengal), the final destination of the Ganges, the Bay of Bengal, while running parallel to the holy river the Ganges, originating from Gangotri. The motive behind the journey is to prevent the melting of glaciers of the Hindu-Kush Himalaya into the river Ganga which flows approximately for more than 2,525 from the Western-Himalayas, to create awareness about Global Warming by highlighting the consequences of the deteriorating condition of the Ganges and to save the Ganges River by directing the world’s attention towards the pollution and harmful substances like microplastics filling up the stream.

Ganga is not only a river; it is also the soul of India. Citizens of India consider the holy river as their mother and the Government of India has even declared it as the ‘National River’, but the sad truth is that the Ganga River is facing a severe crisis due to our negligence.

For the last few years, the condition of the Indian rivers has been worsening at a rapid pace. Many important rivers of India are on the verge of extinction in the near future and many small and big rivers have already disappeared. This is a severe problem we are facing currently.

For decades, the effects of climate change have been more and more visible in the Antarctic: glaciers and ice shelves melting and breaking off prematurely, sea ice disappearing, critically disrupted ecosystems and food chains, and more. A 50 year treaty prohibiting any kind of resource exploitation in Antarctica ends in 2041. Sir Robert Swan, the first person to have walked to both the North and South Poles, started the ”2041” Foundation to spread solutions to mitigate climate change, to bring attention to Antarctica’s present condition, and to create leaders by 2041 to protect this treaty. 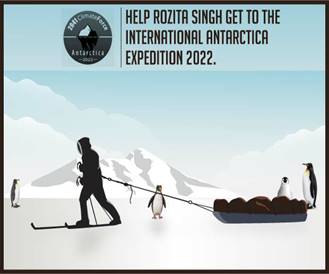 This expedition is an opportunity for participants to connect and learn from the natural environments most affected by climate change, and to realize the urgent need for real-world solutions to address these issues.

The campaign link is at: https://www.fueladream.com/home/campaign/49245

Rozita Singh, who is all set to participate in the 2041 ClimateForce Antarctica Expedition says,

“I am so grateful to have support from so many who believe in my mission. I want to take all these voices together with me to Antarctica where we will start working on a solution-oriented program to fight climate change. The time is NOW to make a big impact on all organisations in the planet- for fighting climate change. It’s a matter of pride for me to be one of the selected few who will represent India and wave the flag in the southernmost continent of the world!”

As a ‘green sheep’ and as a sustainable development professional, Rozita Singh has been selected from among hundreds of candidates to join the 2041 Climate Force Antarctic Expedition in March 2022. For the past 13 years, Rozita Singh has committed her life towards the service of the planet. Rozita Singh is a graduate in Journalism and currently resides in New Delhi. She pursued the world’s very first Masters in Sustainable Development Practice course that was launched at TERI School of Advanced Studies in India. She is currently the Head of Solutions mapping in UNDP India’s Accelerator Lab which is part of the world’s largest and fastest learning network on innovations for SDGs (Sustainable Development Goals). She works every day to scout and scale the most impactful innovations in social and environmental domains with her 90 other counterparts across 114 countries! As a sustainable development practitioner, her vision and contribution have been in terms of ‘connecting the dots’ wherever she goes and breaking the culture of silos.

One Health for a Sustainable Future

Euronics donates Rs. 27 lakh in support of government’s Namami Gange as part of its CSR