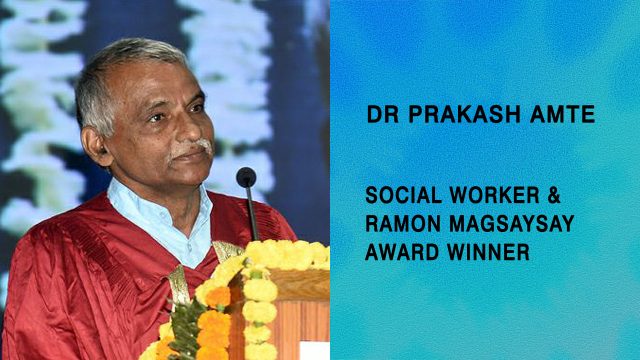 Doctors by profession and humans by conduct, Dr Prakash Amte and his wife Dr Mandakini Amte have been working for tribal population in the remote areas of Maharashtra and innocent animals for decades. They were honoured with Ramon Magsaysay Award in 2008 for ‘Community Leadership’.

Their story became popular after a biopic titled ‘Dr Prakash Baba Amte: The Real Hero’ starring actors Nana Patekar and Sonali Kulkarni was released in 2014. The couple along with their family lives in Hemalkasa, a tribal belt in Maharashtra plagued by Naxalite violence.

In 1973, they started Lok Boradri Prakalp for tribal development and worked extensively for upliftment of rural tribes Madias and Gonds in Gadchiroli district. Amtes’ are accredited for introducing medical treatment and working towards eradication of superstitions in the community. They started providing medical aid to people there and taking care of their health despite all barriers like language, fear in the minds of locals, geography, terrain and others. Currently, Lok Biradri Prakalp has three main projects- orphanage for wild animals, a hospital and residential school for tribal community.

The CSR Journal spoke to Dr Prakash Amte about tribal development and the lessons we in urban India need to learn from the community. Excerpts from the interview…

Living amidst the tribal populations for all these years, what according to you are the major problems they face?

Tribal pockets live in isolation from the rest of the country. This isolation leads to their exploitation as they lack knowledge about how the outside world works. They are easily deceived by many including government officers.

People here are very superstitious. They would believe in black magic and easily beat up someone in case they are told that any person is possessed with spirit, etc. Animal sacrifices are very common. This non-progressive irrational mindset leaves them behind in many ways.

What are these exploitations they face?

Tribes are the original habitants and protectors of forests. But now that forests belong to government, they have to face problems on their own land. Officials know that people there do not know their rights owing to which they are made to work for staying in the forests. They are left with no place to go. They would be punished for hunting in the forests which now officially belongs to the government. It is now that they have gradually started getting their land rights.

They are exploited in many ways in their routine lives. They fear people dressed in clothes. Women face tortures like rape by outsiders including government officials.

They say, our ancestral ways of living had a lot of wisdom. What kind of wisdom can we learn from them?

They believe in community living. You wouldn’t find anyone begging; they help each other. There are no crimes like rapes and thefts here.

Women have better status in their society. Many times, women here look more empowered than other places. People are free to choose their partners. Widow re-marriages are not looked down upon; nor are pregnancies before marriage. All problems of the village will be sorted in the village itself with discussions. There is a lot that needs to be learned from them.

How do tribal ways of living affect forest lands?

Tribal people do not have a tendency to save. Owing to this, they didn’t cut more trees earlier. They cut wood only in the quantities they needed. They didn’t know the commercial value of wood. However, this practice is changing now. This practice helped the maintenance of the cycle of natural resources. Some of their traditions also help preventing deforestation.

Some of their practices also left negative impact on environment. Some tribes would stay at a place only for few years. In about three years, after using the resources, cutting trees and burning the area, they would move forward to another place. This affected the natural reserve. Practitioners of these however were less in numbers thus not impacting highly.

In what ways can government and corporate bodies help the development of tribal community?

Education is the key to development. They need to be educated and connected to the world outside. Initially they used to be hostile, but with passage of time and our work here, their approach has changed. They are now more open to ‘civilised’ people.

Corporate organisations and government bodies can support their education and healthcare. This would help opening of their mindsets to a new world and new ideologies. 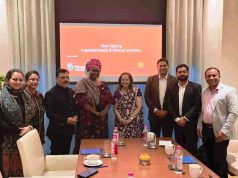 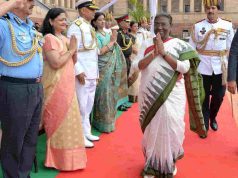 Into the life of Droupadi Murmu, India’s first President hailing from a tribal community