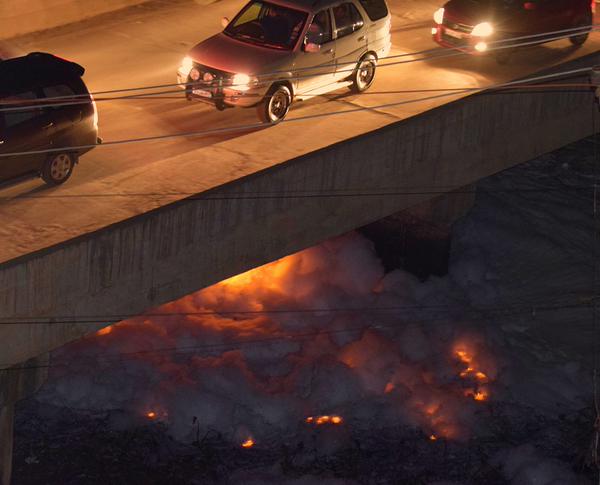 India is on the way to become very highly urbanised with 60% of its population expected to live in cities by 2050. But urbanisation is not a new story in India. Bengaluru, India’s Silicon Valley, has gone from being a “City of Lakes” and a “Garden City” to becoming an urban nightmare. A grim omen for the future of Indian cities.

Once upon a time Bengaluru had 2000 lakes. The government of Karnataka website says there were 262 lakes in 1960. Today the number is down to 81 as per the same website. Its biggest lake, Bellandur, catches fire occasionally. Three instances have happened already with the most recent ‘smoke on the water’ episode occurring in February 2017. Dense smoke emerged from the middle of the lake, flames appeared soon afterwards. The smoke was so dense that it took the fire department hours to locate the source of the fire and get access to the spot, according to news reports. Why did this happen?

Experts say that a lethal mix of factors created a situation that required the slightest of triggers for the lake to go up in flames. Untreated effluents pour into the waters from many industries and homes on its banks. Illegal waste disposal takes place on a large scale and invasive weeds cover large bands of the lake in a thick green canopy. This is a recipe for disaster and officials believe that residents near the lake set the garbage on fire just as people do to garbage in other places. Whether the fire is spontaneous or a case of arson, the fact remains that the lake is terribly polluted.

According to a study by the Indian Institute of Science (IISC), Bengaluru, rapid urbanisation and expansion between 1973 and 2016 caused a 1005% increase in paved surfaces and decline of 88% in the city’s vegetation, while another study showed that water bodies declined by 85% between 2000 and 2014 and concluded that Bengaluru will be “unliveable” by 2025. Unless we do something about it.

The Bellandur lake is in the jurisdiction of the Bruhat Bengaluru Mahanagara Palike (BBMP), or the Municipal Corporation in the city, and the Bangalore Development Authority (BDA), the custodian of the water body. The BDA feels that there is no point in restoring the lake if sewage water is not stopped from entering the lake. The responsibility of diverting sewage water lies with the Bengaluru Water Supply and Sewerage Board (BWSSB). A recipe that has so far spelt disaster.

Relocating residents and industries from around the lake could be an impossible proposition. Getting them to use the lake responsibly may be asking for too much given the current experience. Making the waters of the lake the sole source of fresh water for them and therefore getting them to ensure that the lake remains clean could be a feasible solution in the best spirit of participatory governance.

But the lake and its stakeholders will not suddenly become amenable to this form of radical innovation in urban administration. A major project will need to be done to rejuvenate the lake. Here is where the not-so-recent legislation on CSR can be leveraged. Irony or coincidence as you want to call it, this is in a city which has someone like AR Shivakumar, who through rainwater harvesting has ensured that his house doesn’t need a water connection for the past 22 years. He ensured this using treated rainwater not just for bathing and washing, but also for drinking. You can know more about this initiative here.

A public – private partnership with a consortium of stakeholders that include currently polluting industries, nearby residents and some profitable, water intensive industries such as soft drink manufacturers and beer manufacturers should be formed. A combination of public funds and CSR funds of the profitable corporations with water intensive operations should be used for the rejuvenation of the lake. All stakeholders should then be given rights to use the fresh water from the lake and duties to ensure that the lake is properly re-charged at all times. The lake should be the only source of fresh water for the stakeholders to ensure that they have a vested interest in sustaining it.

This is an experiment whose success can create a new model for the sustainability of fast diminishing natural resources in urban settings. It will also ensure that no policy or surreptitious acquisitive tendency reduces the expanse of the natural resource. Whatever may be the pitfalls of the experiment, it can’t do worse than setting a lake on fire.