It is so easy to believe ‘it wasn’t meant to happen’, if you do not get the desired results even after putting in a lot of honest hard work for the 4th or the 5th time. It is easy to feel that it was all for vain and feel disheartened over not being successful. However, Amai Mahalinga Naik of Karnataka has proven that overcoming this sadness and not giving up the hard work is the way to achieving the goal. For his grit and determination, he is to be awarded with Padma Shri by the government of India.

Amai Mahalinga Naik is a hardworking agriculturist from Dakshina Kannada. Naik had hoped to establish an areca nut plantation amid steep hills with sparse vegetation near Adyanadka, Karnataka, some 50 kilometers from Mangaluru. The 77-year-old man toiled alone to water his two-acre plot of land and successfully established a modest plantation. He performed everything himself because hiring others to excavate would have been prohibitively expensive.

He then set his sights on the type of tunnels he intended to construct: tunnels that delve deep into hard laterite rocks in order to reach groundwater, and through which water runs continuously in a little stream without the need for a pump. He gave up after digging to a depth of 30 metres and resumed digging at a different spot, following his instincts. However, at a depth of 35 metres in the second tunnel, water remained elusive. When he had to cease digging the third and fourth tunnels at 35 metres, he became discouraged because his four years of hard labour looked to have been in vain.

He started digging the fifth tunnel, which was elevated. Finally, he noticed wetness on the ceiling at 50 feet. He found water on his sixth effort, which was 315 feet long. Then, behind his house, Naik dug the seventh tunnel to provide water for drinking and household usage. On his property, he has areca nut trees, coconut trees, banana trees, pepper vines, and cocoa. His work has earned him the title of the ‘Suranga Man’ or ‘Tunnel Man’.

According to agriculture expert Shree Padre, Naik’s entire endeavour was built from the ground up only through his perseverance and optimism. The farm is a man-made resource that includes a garden, a water source, and is run using sustainable agricultural methods. Padre had been following Naik’s efforts for several years and claimed that when tunnel after tunnel he built collapsed, he was ridiculed and mocked.

Naik has been selected as one of the Padma Shri awardees this year for his contribution towards agriculture. Union Minister of Jal Shakti Gajendra Singh Shekhawat tweeted about Naik. He wrote, “What a life, what an achievement. Karnataka’s ‘single man army’ Amai Mahalinga Naik, who has been conferred with the Padma Shri Award.”

What a life, what an achievement. 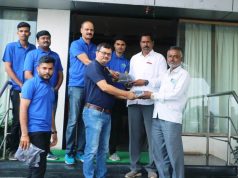