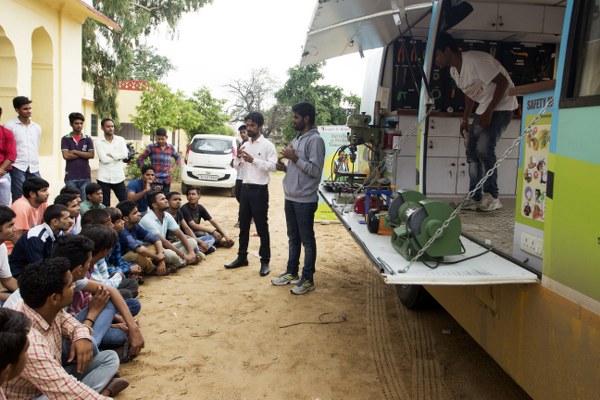 The Indian economy has enormous growth potential, but the impending skill gap is said to be a major roadblock to achieve this potential. Lend A Hand India, a Pune-based NGO recently undertook a Skill Yatra from Pune to Ladakh and brought unprecedented attention to skill education in schools from Pune to Ladakh through “Skills on Wheels” – a customised bus retrofitted with all the necessary tools and equipment to deliver the Multi Skill vocational education in secondary schools.

Lend A Hand India’s focus is to address the gap between what one learns in schools versus what is required in real life by imparting skill education as a part of secondary school curriculum for last 12 years across 10 states in India.

The Skill Yatra begun from Pune and had the final stop at Leh, Ladakh, where it visited the famous “Druk Padma Karpo School”, also known as Rancho School – the location of movie “3 Idiots” The initiative was applauded by Sonam Wangchuk (real life character of  the movie “3 Idiots”). Skill Yatra crossed and halted at various state departments of education, and administrators in Bhopal, Delhi, Chandigarh, Srinagar, Drass, Kargil, Leh, Jaipur, Gandhi Nagar, and Mumbai (in Mantralaya). During this unique Skill Yatra, “Skills on Wheels” visited the Ministry of HRD and the effort was applauded by Prakash Javadekar, Union Minister of HRD.  Rajiv Pratap Rudy – Union Minister of Skill Development & Entrepreneurship also flagged off the Skill Yatra for its journey from New Delhi.

Raj Gilda, Co-founder & Director, LAHI, said, “Owning a skill set is extremely important in a growing economy like ours. It is emerging as the new currency across businesses adding to personal, professional, and economy’s growth. India is caught between maintaining a fine balance between the skill gap and vocational education in far flung areas due to geographic issues. Thus, it is critical to take proactive measures such as Skill Yatra by Lend-A-Hand India to amalgamate vocational education with skill based learning to overcome the existing gap.”

On the day of the flagging off, Sunanda Mane, Co-founder & President, LAHI, stated, “India will need to generate at least 280 million jobs between now and 2050. There is 36 million unemployed youth in India. Of these 24 million live in villages and substantial number move to cities in search of employment. One of the reasons for unemployment among youth is the significant disconnect between the school education and the opportunities, skills, and exposure necessary to achieve full potential and earn the livelihood. Skill Yatra, backed up by Bajaj Auto is one of the solutions that can help the growth of skill education and we are very happy to be one of the partners in the growth and well- being of our country.”