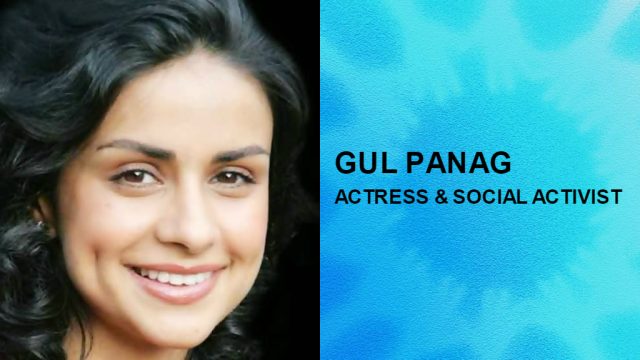 Gul Panag joined politics with the intention to change things. The first part of her political agenda was to fix India’s big problem of gender division.

‘95% of women are raped by people that they know. This is an important statistic because how do you stop that? A powerful law and order situation could check rapes by criminals, but when your own uncle or brother rapes you, what are you going to do? In India we have no retribution. You can rape with impunity because the girl will not speak up. She will be shamed, especially if she knows the perpetrator, or she will be intimidated by how arduous and tumultuous the process of filing a rape case is.’ With this data in mind, Gul began addressing women’s safety for the  pertinent  and  burning  issue it is. ‘I asked myself, “What can be done to enhance women’s safety, especially in cities like Delhi, where AAP has a stronghold?”’ she said. ‘Through my political campaigns I focused on the safety of women. We focused on finding simple solutions. Better policing was a part of this. We wanted to make the police accountable by circumnavigating hurdles, especially in Delhi.’

‘Women on the ground know what’s good for them. For example, they said that once they get off a bus or metro, the part to get home was the big challenge. To combat this they brought forth some unique ideas like last-mile connectivity and better lighting. We decided to introduce something as simple as streetlights. Greater CCTV coverage also worked as a powerful deterrent.

Perpetrators would think twice before touching a woman inappropriately if they knew they were on camera and could be seen. Marshalls on every bus and metro also helped. It’s very simple: women want to know that somebody is looking out for them.’

Furthermore, she added: ‘Our institutions need to be gender-neutral even if our society is not. A courthouse cannot question what a woman was wearing or whether she was consuming alcohol when she was attacked. Institutions have to herald reform.’

Even in the opaque world of politics, Gul was focused and unafraid to be herself. She was authentic and original. I lauded her efforts as she came out of the stereotypical model of a politician, thus symbolizing women’s liberation from normative gender roles. Yet, despite her best intentions and impact, she lost the elections. A school of thought dictated that the men in the community she was campaigning in could have interpreted her biking campaign as rather bold. They would have seen her as someone who could corrupt their domesticated women.

Was there a price Gul had to pay for giving a new face to politicians in India, especially female politicians, in a field dogged by male supremacists? ‘It’s not as if only Bollywood and politics are male-dominated, our society is patriarchal,’ she explained. ‘Secondly, tokenism and symbolism are both not enough to enable change. We have a problem at hand and we need to solve it at the earliest, or the women of India will never be empowered. How else will we see equal participation in all walks of life?’

Gul’s call-out for women to be equal stakeholders with men in society is not an unfamiliar motif. What other ways can women find to be more independent, I asked her.

‘Financial independence is the crux for women to become equal stakeholders in society,’ Gul replied. ‘Our inheritance laws were tweaked to enable women to become equal recipients of their inherited property. But how many women are actually exercising this? I know women who willingly give up their share to their brothers. Why? On top of that, parents don’t give their daughters a push to become financially independent. So a woman neither inherits money nor is she enabled to earn it, leaving her subservient as she is without economic freedom. Once we empower women to earn a livelihood, they can choose to become financially independent.’

Excerpt from an interview with Gul Panag from the book, Feminist Rani by Shaili Chopra and Meghna Pant. The book is a collection of interviews with path-breaking and fascinating opinion leaders–Kalki Koechlin, Tanmay Bhatt, Aditi Mittal, Gauri Sawant, and many more. Reproduced with permission by Penguin Random House India. An award-winning journalist, Shaili Chopra has written four books and is the founder of India’s biggest platform for championing stories of women, SheThePeople.TV, which reaches over 15 million women. Meghna Pant is an award-winning author, columnist and TEDx speaker. Pant has also won the FON South Asia Short Story Award (2016) and the Bharat Nirman Award (2017) for her writing.

Thank you for reading the interview until the very end. We appreciate the time you have given us. In addition, your thoughts and inputs will genuinely make a difference to us. Please do drop in a line and help us do better.