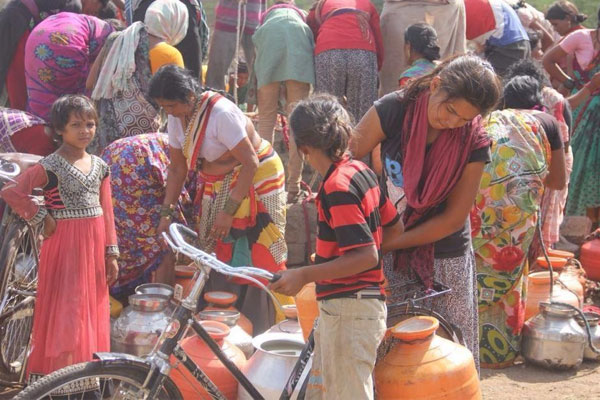 Part I of IV- The Problem is BIGGER than we think

In this article, the first of a four part series on water scarcity, Anirban Ghosh, Chief Sustainability Officer, Mahindra Group shares the enormity of the crisis facing us.

In Aurangabad, 15 year old Gomati treks 2 kilometers, twice daily, to the nearest bore well to fetch water for her family.

In the city of Latur, though water comes through pipes laid by the government, the water reaches homes for only two hours, once every 15 days.

The states of Karnataka and Tamil Nadu constantly bicker about the release of water from the river Cauvery.

Maharashtra frequently resorts to drastic water cuts for industries in the face of water crises.

Maybe water flows 24×7 in your home and the possibility that it could just stop sometime soon is too far-fetched for you to consider. But the possibility is very real. According to international norms, a country is categorised as ‘water stressed’ when water availability is less than 1700m3 per capita per year and is classified as ‘water scarce’ if it is less than 1000m3 per capita per year. In India, the per capita water availability in the year 2015, according to government sources, was 1545m3; down from 5200m3 in 1951. We are a water stressed nation today.

Water stress happens when ‘the demand for water exceeds the available amount during a certain period or when poor quality restricts its use’. An estimated 2.7 billion people around the world are water stressed for at least one month of every year.

India, with four percent of the planet’s fresh water resources and 16% of the world’s population, has always found it challenging to ensure that all its citizens have access to adequate clean water supply. This demand supply mismatch is more severe in urban areas where the per capita demand of 135 litres per capita per day (lpcd) is more than three times the rural demand of 40 lpcd. According to projections by the UN, India’s urban population is expected to rise to 50% of the total population by 2050. This would mean 840 million people in the most water-starved parts of the country compared to 320 million today.

Even if water is available, the quality of the available water is poor at many places. As per the Ministry of Drinking Water and Sanitation, 63282 habitations in rural India receive inferior quality of water supply. Census 2011 revealed that only 31% households in India had access to treated water. An estimated 1,00,000 Indians die from water-related diseases. A UN report ranked India 120th out of 122 nations based on water quality.

It has been projected that per capita water availability in India is likely to reduce to 1401m3 by 2025 and 1191m3 by 2050. We are inexorably inching towards water scarcity. If not acted well in time, the problem can create bigger challenges for the world than we can imagine. The problem after all is way BIGGER than we think it is.

Anirban Ghosh leads the sustainability wing at Mahindra and Mahindra as the Chief Sustainability Officer. He has been working with Mahindra Group since 1999.A gold medal winning engineer from Jadavpur University, Calcutta, Ghosh has pursued doctoral studies in Marketing Management at IIM Ahmedabad. He enjoys music, reading, travelling, driving, cricket and tennis. He is an active public speaker and has represented the nation at the Festival of India across multiple nations.