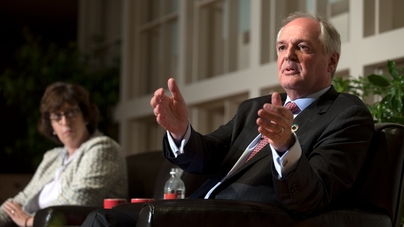 Kraft Heinz’s shock $143 billion bid for Unilever in February 2017 was pitched by many as a clash of cultures. Kraft Heinz is backed by 3G Capital, a Brazilian private equity firm with a reputation for cost cutting and a clear eye for efficiency. Unilever practices a much more conscious form of capitalism, one where the needs of the many outweigh those of the few, to paraphrase its CEO Paul Polman.

Polman, who took the helm at the Anglo-Dutch consumer goods company in 2010, believes the reason “business should be around is to serve society,” and has steered the business away from a short-term focus on delivering returns to shareholders, putting sustainability at the heart of strategy.

Unilever’s long-term goal is to decouple growth from environmental impact, while increasing positive social impact. Thus far, results are positive, with the company’s sustainable brand portfolio growing faster than the rest of the business, delivering 70% of turnover growth in 2017. Unilever is not the only big company shifting away from shareholder primacy and short-term goals. Food and drink giant Danone is the first multinational company to pursue certification as a B Corporation, and its goal is to create value for all its stakeholders, benefiting everyone from consumers to employees, suppliers and owners.

Voices calling for a more sustainable form of capitalism have multiplied too. In her 2017 book, Doughnut Economics, Kate Raworth argues for an alternative form of economics, one which meets “the needs of all within the means of the planet” and one where growth cannot be the only measure of success. L Hunter Lovins, a champion of sustainable development, will shortly publish A Finer Future: Creating an Economy in Service to Life, which calls for “a new narrative of a world that works for everyone” and offers a “blueprint for a regenerative economy.”

Nevertheless, the appetite for quick financial returns means that cost cutting models that prioritize short term results are still very much part of the everyday. Can both models coexist, or will there be a victor in the battle between sustainability and efficiency?

The Kraft Heinz bid offers some interesting pointers. While it was ultimately unsuccessful, Polman admits that Unilever subsequently had to make some compromises, wooing its shareholders with a share buyback.

That said, the incident quickly revealed support for the Unilever model. According to the Financial Times, a YouGov petition against the bid gathered more than 100,000 signatures in less than 48 hours and Bono, the lead singer of rock band U2, was moved to offer to write a song.

Polman sees this as a battle between value transfer and value creation, telling Harvard Business Review that “it’s the difference between working for a few billionaires or for the billions of people who need us. I still believe and sincerely hope that over the longer term the billions will prevail.”