On the tenth edition of Daan Utsav, Smartworks is celebrating and spreading the spirit and joy of giving across India. The company has partnered to support Goonj’s ‘Dil Ki Suno, Kuch Karo‘ (Listen to your heart, Do something) campaign and #HaftaChallenge, a campaign by Give India. The company is also supporting Child Education, Women Empowerment & Feed a Poor Senior Citizen by contributing to Letzchange in the mission.

Smartworks has invited its member companies and employees to be a part of the initiative as an active participant by either contributing time, money, materials or skills to benefit an individual, organization or a cause as per one’s interest.

Daan Utsav (earlier called the Joy of Giving Week) is India’s ‘festival of giving’. Launched in 2009, the festival is celebrated every year – commencing on Gandhi Jayanti – from October 2 to 8. It brings together citizens from all walks of life to celebrate ‘giving’ in its truest sense. In 2016, millions of people participated in more than 1,500 events across 200 cities in India by raising several tens of crores of money and material donations and by giving countless volunteer hours thereby making a substantial change in the lives of the not so privileged.

Goonj is spreading the idea to create large scale awareness on the role our underutilized material can play. Smartworks placed donation boxes at all their 15 centers and encouraged people to participate by donating clothes, toys, books, utensils or any other valuable material that can help people who belong to marginalised strata of the society.

From auto rickshaw drivers to CEOs, school children to celebrities, homemakers to opinion leaders and media personnel, millions of people from all walks of life came together during this week to give their time, money, resources, or skills back to society by creating or participating in events of their choice. 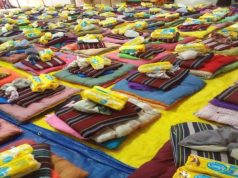