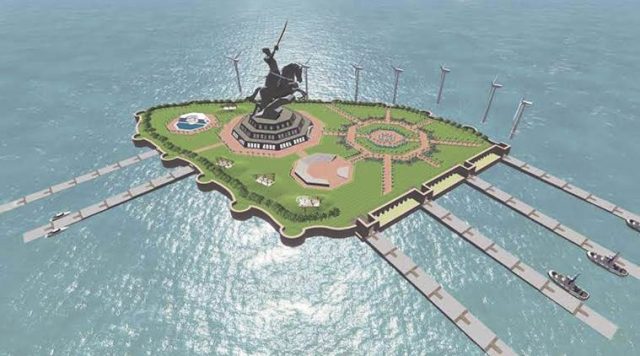 India is a democratic country. This means, the laws, policies and actions in India are of the people, by the people and for the people. But is this the case in reality?

News about statue of medieval king Chhatrapati Shivaji Maharaj has been doing the rounds since the last month. In spite of strong opposition to the move by large sections of citizens via online petitions and social media among others, the state administrators are obstinate to build the statue.

Maharashtra government has decided to build the statue on 16 hectare island, 2.6km off Rajbhawan in the Arabian Sea at an enormous cost of Rs 3,600 crore. Apart from the exorbitant cost involved, concerns are raised over factors like environmental damage that holds value beyond economic factors too.

It is not long back that the state government had called the leaders of corporate and Bollywood sectors to seek their support for development of 1000 villages in Maharashtra. In August 2016, Maharashtra chief minister Devendra Fadnavis had called for a meeting with corporate dignitaries like Ratan Tata, Anand Mahindra, Rajshree Birla among many others and Bollywood personalities like Amitabh Bachchan and Ronnie Screwvala. Over 50 eminent personalities attended the meeting assured their support in the initiative.

On one side, a lot is expected from the corporate firms. They are asked to be socially responsible by earmarking two percent of their profits. And on the other side, state government decides to spend money meant for the welfare of its people on building a tourist spot for a mammoth price.

Recently, Mohan Bhide, a professor from Mumbai filed a Public Interest Litigation (PIL) against the construction of this statue. According to his PIL, state government of Maharashtra has a loan of Rs 3.51 lakh crore which is the highest in India. “With such high loan amounts, how can we afford to spend so much on a statue? For this project, again we will have to take another loan as there is no provision for it in the budget. Maharashtra cannot be called a rich state on the basis of the soaring loan amounts. It is unfair to use hard earned money of tax payers to create such structures or repay needless loans,” said Bhide.

“A total of 21,000 farmers have committed suicides from 2001 to 2016. About 17,000 children died last year of malnutrition. Maharashtra ranks second in India with as many as 4.96 lakh children below the age of 14 years are forced to work. Healthcare facilities need pressing attention across the state. With many more grave issues waiting to be resolved, it is sad and appalling that our government wants to spend money on such cosmetic projects,” added Bhide.

Despite all the criticism, Fadnavis, confirmed the project’s implementation and shockingly said, “How can we think about the cost when it comes to building a memorial for Shivaji Maharaj? He is our pride and it would only be right to build a grand memorial in his name.”

This is not the first time that an Indian state is spending money meant for state welfare in unnecessary decorative projects in the name of our historical leaders. Gujarat is already in the process of getting ‘Statue of Unity’ ready at the cost of nearly Rs 3k crore. Once ready, the memorial will be the tallest statue in the world. But not for long as the Shivaji Memorial statue will be 190 metres high, i.e., eight metres taller and hence would rank first in the world.

“With its timing being just before the significant Mumbai municipal elections, it clearly looks a political gimmick to win votes in the name of the legendary ruler. I wish the government makes hospitals in Shivaji Maharaj’s name or maintains the forts made by the king himself as they currently are in terrible shape,” said Bhide.

The state government bypassed legal procedure by getting an exemption on February 5, 2015, from conducting public hearings on the statue’s construction.

We live in a democratic country and the voice of people should be heard and acted upon. Politics is an integral part of our system and cannot be avoided but we it should be ensured that politics enhance our democracy and not ruin it.