Nestlé India, in collaboration with Recity Network and Dalhousie Municipal Council launched the Hilldaari Initiative today at an event in Snow Valley resort, Dalhousie in the presence of key Government dignitaries. The movement aims at transforming solid waste management practices and making Dalhousie one of the cleanest hill stations of India.

At the event, 12 Household waste management professionals, were felicitated for their exemplary service to the city. A campaign anthem, ‘Do Ekam Do’, inspiring locals and tourists to be ‘Responsible towards hills’, was also performed by Manzil Mystics, a folk fusion band from Delhi.

Speaking at the event, Dr Murari Lal, Sub-Divisional Magstrirate, Dalhousie, said, ‘In the pilot stage, we have ensured that the vehicles plying to collect waste from the city have two separate compartments to collect dry and wet waste. In Dalhousie, the terrain makes it difficult to collect waste from certain areas. To tackle this, ‘caged storage bins’ have been installed as a pilot in ward 4. I hope that by taking up such interventions, we can solve problems specific to the city and the terrain.’

According to Mr Manoj Chadha, President, Dalhousie Municipal Council, ‘The idea of a collective movement is to bring multiple stakeholders on to a common platform. We have already started by distributing masks, gloves and gumboots to our waste management professionals, and recognizing the service they do. It is truly encouraging that organizations like Nestlé India are collaborating with us. I hope that more and more people join the movement, and we emerge successful in our quest to make Dalhousie one of the cleanest hill stations of India.’

Commenting on the initiative, Mr Sanjay Khajuria, Director – Corporate Affairs, Nestlé India said “As a company, we share the ambition that no plastic waste should end up in the landfills. We are delighted to be expanding the Hilldaari initiative in Dalhousie and are extremely grateful to the local authorities for their support. With the support of the Hotel Association in Dalhousie, the team behind the Hilldaari initiative has conducted a pilot awareness campaign across 96 hotels and also partnered with various stakeholders to undertake multiple clean- up and plantation drives. Now as the initiative progresses, the team will implement contextualised solutions for different sectors including households, markets, offices and events.”

Mr Anurag Tripathi, Project Lead, Hilldaari, added: “With all stakeholders coming together, we are looking at building a model Hill station,  that can inspire a love for the hills and encourage tourists to take some of the best waste management practices back to their homes.” 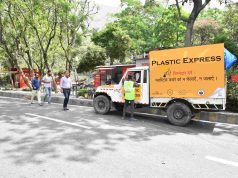