Scoliosis is a disorder of the spine, and its surgeries are generally done only in large hospitals in big cities. Kaka-Ba performs scoliosis surgery  on  17-year-old Surat girl.

A 17-year-old girl from Surat has undergone surgery for adolescent idiopathic scoliosis, a disorder in which an abnormal curvature of the spine appears in late childhood or adolescence, at Bharuch’s Kaka-Ba hospital, which is run by drug maker Cadila Pharmaceuticals’ CSR arm.

Dency Akbar, a resident of Amroli in Surat, was detected to be suffering from adolescent idiopathic scoliosis 4-5 years back. Instead of growing straight, her spine had developed a side-to-side curvature and was turning into an ’S’ shape.

“Dency was in extreme pain because of the disorder for some time. Her deformity had also started to worsen, which is why we decided to perform the surgery on her spine. This technically demanding surgery and not the norlal spine surgery, Hence,we used the  Neuro monitoring System for the surgery, a high end instrument which helps/ guides the surgeon to avoid any damage to nerves”.   said Dr. Alpesh  Patel Kaka-Ba Hospital.

“This was a technically demanding and rare surgery, but we accomplished it successfully. The X-rays also show the difference in the shape of the spine, which is straight now,” he added.

The cost of the surgery was approximately Rs. 5 lakh, but Dency’s family did not have to pay any money, as the entire cost was covered under the central government’s Ayushman Bharat scheme.

While the surgery has changed Dency’s life, it is also a big achievement for Kaka-Ba Hospital. Kaka-BA  hospital established by the visionary founder of Cadila Pharmaceuticals Limited, Shri Indravadan A Modi, Kaka-Ba hospital has been instituted in the memory of his cousin who died due to typhoid due to lack of medical facilities at Hansot, a small village in South Gujarat. Determined to provide quality healthcare services at affordable cost to the poor.

“Scoliosis surgeries are very risky and are generally done only in large hospitals in big cities by or under the close supervision of highly qualified super-specialists. That Kaka-Ba Hospital was able to perform the surgery successfully speaks volumes about the quality of our doctors and healthcare personnel, and the advanced technology and equipment available,” said Dr. Bharat Champaneria, Trustee of Indrashil Kaka-Ba and Kala-Budh Public Charitable Trust, which that runs the Kaka-Ba hospital.

Scoliosis is a sideways curvature of the spine that most often is diagnosed in adolescents. While scoliosis can occur in people with conditions such as cerebral palsy and muscular dystrophy, the cause of most childhood scoliosis is unknown.

Most cases of scoliosis are mild, but some curves worsen as children grow. Severe scoliosis can be disabling. An especially severe spinal curve can reduce the amount of space within the chest, making it difficult for the lungs to function properly.

Children who have mild scoliosis are monitored closely, usually with X-rays, to see if the curve is getting worse. In many cases, no treatment is necessary. Some children will need to wear a brace to stop the curve from worsening. Others may need surgery to straighten severe curves

– One shoulder blade that appears more prominent than the other

– One hip higher than the other

– One side of the rib cage jutting forward

– A prominence on one side of the back when bending forward 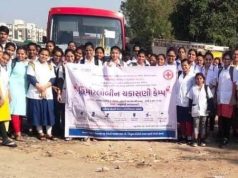