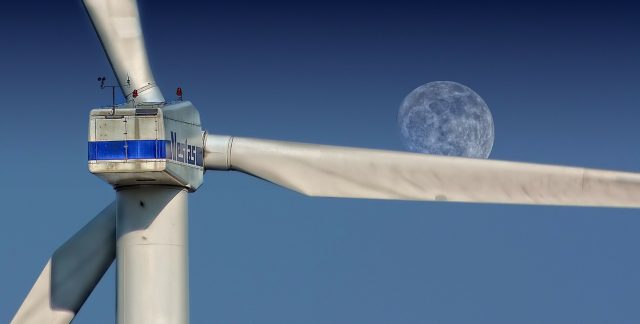 With its sizeable purchase of renewables, Google says it’s currently matching all of its total energy use with clean energy sources. But when you hear a company like Google say, “We’re 100% renewable energy,” it usually means that it is, on balance, buying as much clean, renewable energy (wind, solar, etc.) as it is consuming unclean, non-renewable energy (coal, natural gas, etc.) in a given year. That’s not the same as directly “powering” their operations with all renewables all the time.

Companies typically can’t generate enough power for a data centre from an onsite solar or wind farm; they have to connect to the local power grid like everyone else. And the local utilities that run the grid get their power from a mix of sources, some dirty, some clean. The energy buyer can’t choose to buy only the electrons from the grid that were generated from clean energy sources.

Instead, buyers offset their energy use. Many companies sign virtual power-purchase agreements whereby they buy renewable energy credits, financial instruments that certify that a certain amount of green energy has been added to the electric grid. In some markets, corporate customers can go directly to a green energy wholesaler to get their power. Big buyers like Google, Apple, Microsoft, Amazon, and Facebook actively organize as well as invest in new clean energy projects in markets where they operate, so there’s more of the stuff available to buy.

But these tactics are just the first moves in a long game. In a new research paper, Google begins to look at an ultimate goal: converting its data centers to 100% green energy—all day, every day. And it provides a framework for achieving the real-world steps needed to get there.

“Achieving 100% renewable energy is just the beginning,” Michael Terrell, Google’s head of energy market development, told me. “We’re keeping our eyes on the prize, and that is getting to carbon free for every hour of the day for every location.”

This entails a different way of measuring progress. Buying enough clean energy to make up for all the dirty energy you’re actually using is one thing, but matching energy needs with clean energy resources all day, every day is quite another. The scientists call the latter “spatial and temporal specificity,” and that’s what Google is starting to think and talk about.

To understand the company’s goal, consider the LEED rating system for green buildings. Apple’s new Apple Park facility, for example, was awarded a Platinum LEED rating for its use of natural cooling, efficient ventilation, and onsite solar panels. Thinking about spatial and temporal variability has become important for policy analysts and engineers, but by talking in those terms, Google may be able to reframe the problem for other big power buyers, utilities, and people in the financial communities.

Further development on energy storage technology will be needed, as well as investment in green energy sources including nuclear. And buyers, utilities, and financial institutions must work together to create new ways of contracting for 24/7 green power.

A recent study by the U.N. tells us that human beings have about another decade to make dramatic changes in their energy usage before permanent and irreversible damage is done to the environment. At the very least, Google’s new research paper shows that the company is portraying the problem of moving past carbon-based energy as subject to a ticking clock.