Following his father’s footsteps—a national level swimmer— young Suyash Jadhav started swimming and aspired to fulfill his father’s destiny by competing in the international arena. Tragedy struck in Class 6, when a routine day of fun and games ended with Suyash suffering serious injuries to his upper limbs after getting accidentally electrocuted by unprotected wiring at a construction site. Both of Suyash’s arms had to be amputated and he subsequently spent six months in hospital following the incident.

However, he did not give up on his dreams. He continued to compete in differently-abled competitions domestically and began to show promise. Not long after, he started competing and winning medals for India at the international level. Suyash became the first Indian para swimmer to record the ‘A’ qualifying mark for 2016 Paralympics in Rio and left a mark on the biggest stage of them all. He also set new personal bests in two of his three events at the Games. Suyash also won a Silver medal at the 2017 IDM Berlin World Para Swimming World Series and represented India at the 2017 IPC World Para Swimming Championships in Mexico City.

Last year, the 24-year-old swimmer made history at the Asian Para Games by becoming the first Indian to win three medals in any major international event. He won a gold in the men’s 50m butterfly event, bronze medals in the men’s 200m individual medley and 50m freestyle event in the S-7 category. Recently, he won Parathlete of the Year award from Sportstar magazine. Suyash is one out of 32 elite differently-abled Indian athletes supported by the IndusInd Para Champions Programme.

The programme is a culmination of IndusInd Bank’s partnership with the GoSports Foundation for making a visible difference in the lives of elite para-athletes. It aims to provide the handpicked para-athletes with the necessary resources in their quest to bring India laurels at the world’s biggest sporting events. By promoting their inspiring stories in the public domain, they hope that the initiative goes on to inspire many others while bridging social barriers, building social acceptance and creating circles of excellence.

Says Deepa, “Being a Paralympic athlete comes with a lot of challenges and I thank Honda for supporting me in my journey to make India proud on international level. Personally too, Honda has been a part of my life. My specially modified Navi bike has given wings to fly making me feel more empowered. I now look forward to winning more laurels for India with Honda’s support and spreading awareness on disability sensitisation in our country.”

Para badminton has come of age in India, with the country doing well in the 2018 Asian Para Games, where it picked up nine medals. For 29-year-old shuttler Manasi Joshi, it was a moment of triumph over adversity when she clinched a bronze in women’s singles (SL3) in the Para Asian Games in Jakarta.

She lost her left leg in a road accident in Mumbai in December 2011. However, that did not deter her and she continued to follow her passion and established herself as the World Para Badminton champion. For someone who rarely returned without a medal in any international event ever since she started competing in the 2015 Worlds (mixed doubles silver), 2016 Worlds (singles bronze) and 2017 Worlds (singles bronze), Manasi is grateful to chief national coach P. Gopichand and to her sponsors for being so understanding about the needs of specially challenged athletes.

Says Manasi, “Currently I am supported by the Welspun Group and Mallcom. Their support has been invaluable. I hope this relationship can continue for a long time. Manasi is financially supported by Welspun for her prosthetics and travel across the globe for tournaments.

The future of Indian para badminton looks good, going by the overwhelming response to a two-day camp in Mumbai organized earlier this year by the Para Sports Association and supported by the American School of Bombay (ASB). From 12-year olds testing the waters to seasoned players looking to hone their game, there were participants across age groups and of different disability types like autism, cerebral palsy, Down syndrome and wheelchair users.

Among the more ‘seasoned’ players was 15-year-old Farhan Choudhury, who started playing badminton two years ago. Farhan, who has mild cerebral palsy, wants to play at the competitive level. It is in players like Farhan that the future lies, believes Satyaprakash Tiwari, one of the coaches at the para badminton camp.

Mohammed Shams Alam Shaikh, champion para swimmer and Secretary, Para Sports Association, attended the Global Sports Mentoring Program, a United States government initiative for disabled athletes, and strongly believes sports has the power to change the lives of people with disabilities for the better. Through such camps, he hopes to nurture young players and create awareness. Last year, he organized the first camp in para swimming, also for free with the support of the ASB.

“Our engagement with Shams was kickstarted by the United States Consulate,” says Matt Ruffle, Director of Institutional Advancement at the American School of Bombay. “Our team then engaged with Shams’ team to work out the logistics. We support a range of organisations and initiatives in Mumbai as part of our CSR.”

A test engineer by profession and the sole game changer of her life, Kiran Kanojia is a living inspiration for many. She was travelling to Faridabad on 24th December 2011, a day before her birthday, looking forward to celebrating her 25th with her family. Little did she know that hours later, she would be lying in the ICU of a hospital, signing the consent form that would allow doctors to amputate her left leg.

After months of recuperation, physiotherapy and battling depression, she found the courage to accept her loss, her pain and her missing limb. With support from Hyderabad based Dakshin Rehab, she learned to walk with her prosthetic foot and run with a carbon blade, training with a group of amputees and runners. As of March 2019 her best timing is 2 hours 44 minutes at Mumbai Marathon 2015. She is a champion blade runner and is invited to Delhi and Mumbai to run and flag off marathons. Kiran’s fervour for life is extraordinary as she battles pain on a daily basis when she is training. “Bruising, healing and pain management have become part of my life,” says India’s first woman blade runner.

This article appears in our quarterly print magazine. To grab a copy, click here 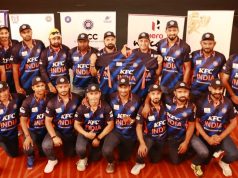