In the wake of Universal Children’s Day, in the final part of our children special series, we bring to you some of the most difficult phases of lives of children affecting their mental stress levels and in turn their overall developments

Part III of III Legal and Social Crimes against children

Painting a cruel and an absolutely unacceptable picture of humanity about 20 children in a recent case of Navi Mumbai were found to have been sexually molested and abused repeatedly by a local vada-pav vendor.

Children were lured by the accused- Mutthu Naddar offering them vada pavs and toffees regularly. He used to take them to their home click obscene pictures and videos of them and sexually harass them. Police said the videos they found were very cruel.

Taking advantage of the innocent minds of these school going boys and girls, he threatened them to kill their mothers if children spoke to anyone about the action. Threatening them he used to call children repeatedly and assault them.

Words written above may not be able to present the trauma children had to face. But moving to grave reality of our country, sexual assault is rampant and is irrelevant of class, culture, religion or geography. Asian Centre for Human Rights (ACHR) in its report published in 2013 said that sexual offences against children in India have reached epidemic proportion.

A total of 48,338 child rape cases were recorded from 2001 to 2011. With each year, the numbers of cases are seen to be rising. It needs to be noted that not all child rapes are recorded due to various reasons- the most common of them being threats by the rapists.

According to a 2007 study by the Indian Government of nearly 12,500 children from across India, 53% of children – boys and girls equally – were victims of sexual abuse. This means that every second child in India is victimized by sexual abuse. It is

In 2012, the Indian Parliament passed the Protection of Children from Sexual Offences Act, which incorporates child friendly procedures for reporting, recording of evidence, investigation and trial of offences.

Various organizations are working in this area and teaching children about ‘safe touch’ and ‘unsafe touch’. Childline Foundation that runs a helpline call centre numbered 1098 for children in distress states sexual abuse as the most heinous form of crime against children. “Children like women are marginalised and need attention. We get about 6 million calls in a year approximately regarding various issues at our helpline 1098,” says Sudeesh PM, Project Coordinator, Communications and Strategies, Childline.

He further adds, “We not only speak to the affected children but also our organisation intervenes in the issue. We have a 60 minute target to reach the affected child after we receive the call. Also we emphasise on language; for example once known that the caller child’s language is Tamil, our Tamil speaking executive would help. ”

Children have been victims of various crimes frequently in our country like sexual abuse, child labour, child marriage, child trafficking, abduction and many more. With every such crime, the child is pushed towards a harrowing state of mind that in most cases leaves a life lasting impression on his/her mind.

“Any trauma to a child is perceived as violation and interference with the development of the child. It causes skewed emotional, physical and spiritual development. It provides the base for future psychological disturbances like depression, obsessive compulsive disorder, inability to maintain relationships, low self esteem and low interest in all activities,” says senior psychiatrist Dr Harish Shetty.

Child labour and child marriages are other major reasons for stress for children. In the age where they should be studying and playing, children are forced into responsibilities. According to the census report of 2011, the figures of working children in the age group of 5-14 years are 43, 53, 247. These figures are far low than their corresponding figures of 2001 which were 1, 26, 66, 377.

UNICEF in 2014 in its report presented statistics of child marriages worldwide depicting India’s major contribution to numbers of child marriages across the world. India is one among the top 10 countries with the highest rates of child marriages. According to the report, women between 20 and 49 years in India were surveyed and it was found that 58% of them were married or were in union before the age of 15 and 18 years.  Almost half of all child brides in the world live in South Asia. India constitutes one third of these South Asian child brides.

The number of missing children in India is also pretty embarrassing. According to figures provided by Home Ministry in Parliament, over 3.25 lakh children went missing between 2011 and 2014 (till June) at an average of nearly one lakh children going missing every year. Many of these children either run away from their homes due to poverty, physical abuse or other reasons and then are left open to cruelties of world. Many children are also abducted and trafficked for various reasons like sexual exploitation, cheap labour and begging.

It is important to take care of the mental state of children and ensure restoring it to normal in case of any crime against them. “What is important is all children who are traumatised by any offense need to be counselled though they behave happy and normal. Many times trauma isn’t visible to all so it is important that the stories that the child has integrated into his mind, or interpretation of those stories which are integrated needs to be repaired and child proceeds to have normal emotional development,” adds Shetty.

To ensure a bright future for the country, it is important to warrant overall development of children and also empower them. MelJol, an organisation working in this area conducts activities among the underprivileged children in 11 states and makes groups of children called Aflatoun (Based on an entertainment character) Clubs which further functions as a democratic body for children issues at their level.

“These children groups that we form have weekly meeting to discuss their issues and also have elections in a democratic form to elect their heads. Under financial literacy, we teach them banking and also get their bank accounts opened. The whole concept is to make them ready for the worldly challenges,” says Subrat Nayak, Deputy Director, National Program, MelJol.

According to Nayak, one of the Aflatoun Clubs was able to stop a child marriage in a village Bhauradih of Jharkhand. “During one of the Aflatoun club meeting, it was raised that one girl child from the Aflatoun club was scheduled to get married. The child herself was present for the meeting and said that she does not want to get married. Members said, they would speak to her parents and try to address the issue. The club members went and protested to her parents but they were not entertained. They then reached out to MelJol’s local partner NGO(NEEDS) for support, but nothing happened. The members with NGO then went to Block Development Office (BDO) and requested their intervention. The BDO along with local police summoned the parents and cautioned them on the consequences. Further they made them sign a bond that they will not force their daughter for the marriage. This has saved a childhood,” adds Nayak.

Along with education, we need organisations, machinery and human resources to tackle these heinous crimes that put children under tremendous pressure and halt their development. Corporate Social Responsibility (wp) intervention in this field can prove to be of great help in terms of funds as well as human resource if we have employees participating in such issues.

“I reckon this entire 2% concept cumulatively make a huge amount. But certainly there is a greater need to make it more structured when it comes to awareness on this,” says Nayak. 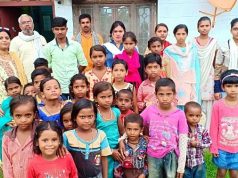