When I think of the Durga puja celebrations, the most indelible in my memory is the grand one I saw in the film ‘Kahani’. It had the flavour of Durga puja festivities enjoyed by so many women in Bengal.

There is increased sensitisation about women empowerment and female leadership today, but did you know that we were already ’empowered’ and have a rich legacy of powerful female icons since ancient times? It was extensively seen in our concepts of human existence, goddesses and their worship.

The feminine factor is well recognised by the ancient philosophy of Sankhya in the concept of Purusha and Prakriti, known in the Bhagavad Gita as “The field and the knower of the field”. Prakriti is an active, changeable, earthly and eternal entity. It represents the female aspect of creation. The entire universe is created out of Prakriti. According to the Sankhya philosophy, the world is created as a result of the union between Purusha and Prakriti, where Purusha means the principle of spirit or pure consciousness and represents the male aspect of creation. Purusha and Prakriti are the two basic, independent and eternal principles that are the main cause and reason behind existence.

Similarly, the goddess was worshipped as the consort of gods as they were the ‘shakti’, the divine strength and the cosmic power of their spouses, the ‘shakta’. A god was visualised as inactive and transcendent and it was the goddess who was active and immanent. The icon of the ‘ Ardhanarishwara’, half-Shiva, half-Shakti is a graphic portrayal of this union of the divine forces. Like Shiva, Durga in the form of Mahakali has a third eye, wields the trishula (the trident) and at times, has matted hair. Both have the ugra roop (the angry persona) and the Saumya roop (the benign, peaceful persona); this is unique to these two enigmatic deities.

Durga Puja celebrates the creation, battle and victory of Goddess Durga. She is called Mahishasuramardini because she’s said to have killed the ‘buffalo demon’ Mahishasura on Dashami – the tenth day. The multi-headed demon king Ravana was killed on Dusshera day which coincides with the Dashami of Durga Puja. The nine days of navratri are a time for the worship of the goddess and her forms. The worship of Durga takes in her 10 main aspects called the dasa mahavidyas. Durga protects mankind from evil and misery by destroying evil forces such as selfishness, jealousy, prejudice, hatred, anger and ego.

Navratri is also the celebration of the three gunas – Tamas, Rajas and Sattva that are symbolised by Durga and her many forms but essentially by Durga, Lakshmi and Saraswati respectively. The devi is ‘Trigunatmika’ – the owner and master of the three gunas. Gunas are our innate qualities that can be refined through the divine consciousness. There is no physical entity without these three dimensions.

The gunas are responsible for our behaviour. Every being in this creation is caught in the play of gunas. ‘Tamas’ is ignorance or inertia. When Tamas is not in balance, we experience delusion, misunderstanding and dullness. ‘Rajas’ is activity, greed or desire. When Rajas trait dominates our personality, we feel restless, we are extremely greedy for money, and we have too many desires to accomplish. As a result, we either feel very excited or extremely low. Sattva is transcendence. Sattva is dominating in our environment or in our body when we feel light, happy, pleasant, alert and awake, and our perception is clear.

As we celebrate Durgotsav, while we seek Durga’s blessings, there is a need to internalise and follow the moral values and rationale of the Goddess, irrespective of our gender. Most importantly as women, we must learn and imbibe the righteousness, fearlessness and ethics of Goddess Durga and her forms.

I call upon every woman reading this to believe and practice the thought: ‘I’m Durga’. It can empower her to face her smallest to biggest problems with wisdom and ease. It’s important to tell ourselves, as much as possible: “I’m not a powerless, submissive woman, I’m Durga. I have all the necessary ‘weapons’ and now I can fight. I’m strong, intelligent, worthy. I can look at things rationally, be decisive, solve my problems objectively, at the same time fight my battles fearlessly, my emotional battles with grace while retaining the feminine qualities of motherly love, forgiveness, compassion, patience and dignity.”

The celebration of human values together with the strength of Goddess Durga shall help us all empower, evolve, achieve and live with peace and prosperity.

“The unspoken moments, pristine and feminine,
gliding on the watery waves of expression
Creating a mosaic worth living,
in this universe of present and future…”

The columnist Rashmi Pitre is an actress, poet and painter most known for her work in television. She has showcased at 34 painting exhibitions in India, Canada and the USA including Jehangir Art Gallery. She has a Bachelor of Arts (BA) Honours in Ancient Indian Culture from St. Xavier’s College, Mumbai and a Diploma in Original Philosophy of Buddhism. 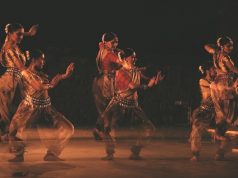 Highlights of Women’s Day in India

India Ranks 117th in Women, Business and the Law 2020 Report