Edelweiss Group recently announced a public service and awareness initiative, #HelpYourHelp, a platform that helps build awareness and facilitates change for the domestic help community, who have been impacted by COVID-19.

Olympic athletes such as Dipa Karmakar, Hima Das, Rani Rampal have taken the #HelpYourHelp pledge and encouraged others to follow suit.

Battling loss of income and job insecurity, the pandemic has painfully highlighted the lack of financial preparedness for domestic workers. The Help Your Help platform attempts to educate and encourage individuals to empower this unorganized community over the long-haul, through a digital repository of 20 Government welfare schemes, across various areas like Finance, Health, Women and Children.

It also simplifies the process for acquiring important Documentation that allows this community to unlock the benefits of these welfare schemes. Kick-started a few weeks ago, this purely organic campaign has witnessed over 3,000 individuals coming forward to pledge their support.

As part of the CSR campaign, Edelweiss Group launched a film that takes one through a montage of several instances wherein their domestic help – caregivers, cleaners, security guards, drivers, cooks – have stood by them, being their everyday heroes and life support. The film highlights the fact that while one helps them tide over their daily struggles, they desperately need long-term financial security. The video garnered a tremendously positive response and was extensively shared across platforms.

To heighten awareness around the CSR campaign, Edelweiss Group encouraged their Twitter followers to show their appreciation for their help with the hashtags #ThankYourHelp and #HelpYourHelp. Personal experiences shared by enthusiastic followers aided in breaking through the clutter with both hashtags trending in 6 cities across India. 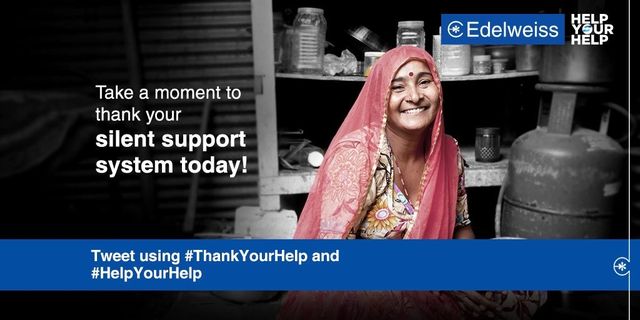 Shabnam Panjwani, Group Head – Marketing & Communications, Edelweiss Group said, “Rising to the needs of the community we operate in and giving back in a meaningful way has been a constant endeavour at Edelweiss. Moving beyond the simpler ‘feel good’ & ‘look good’ area, we have attempted to take this initiative into the ‘act good’ space via www.HelpyourHelp.com, enabling all of us to finally walk the talk. It is our hope that if every individual steps up to help this community of helpers in their own lives, it will encourage them to chase their dreams and empower them to truly #BeUnlimited.”

The platform can be accessed on www.helpyourhelp and also facilitates on-ground support in association with Haqdarshak, a social enterprise working with communities, providing access to welfare schemes that help in their well-being and long-term stability.

Corporate Involvement is the Best Way to Gain Medals